In the most significant move for the Italian Church to date, Pope Francis appointed new archbishop for the major sees of Palermo and Bologna yesterday. To the former he appointed Msgr. Corrado Lorefice of the clergy of the Diocese of Noto, and to the latter, Msgr. Matteo Maria Zuppi, auxiliary bishop of Rome. On 27 September of this year, the Feast of the Archangel Michael, Bishop Zuppi celebrated Mass at the Church of the Frisians in Rome, during which he gave a homily which could well serve to get an idea of the focus of the new archbishop of Bologna. Dealing with good and evil and not shirking away from the sometimes difficult imagery of the Book of Revelation, here is my translation of the text (which is a translation of a translation, as my source was the Dutch translation of the Italian original). 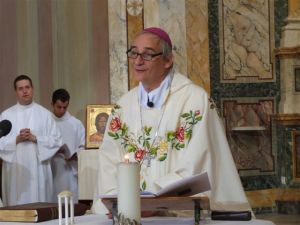 “We are here in a small church next to the great Basilica of Saint Peter, near the colonnade which wants to embrace everyone and everything. I hope you too feel that embrace, love and mercy of the mother who opens her arms, especially for those who are vulnerable, who suffered, carried away by the storm of life. Here, there are a few pews from the Second Vatican Council which taught us that the joy and hope, the sorrow and worries of the people of today, and especially those of the poor and those who suffers, are the joy and hope, the sorrow and concerns of Jesus’ disciples. And all this is human can also be found in their hearts. We often do not want to hear that voice. We are afraid and close ourselves off. We raise many walls, fences and borders. These entrap us as well. fences make you feel weak when you are strong, poor when you have enough. They make the other an enemy or a danger. The result of this is that we no longer feel sympathetic with people who lose everything while fleeing from wars that take everything away from us. From behind the closed fence we do not see the child that dies in the great sea: Aylan. When a child dies like that, that is an Apocalypse, because man is destroyed by the dragon that makes life inconsequential. We heard the great vision of Revelation. The Apostle John helps us not to run away from the many apocalypses, not for the evident like terrible wars, but neither for those of loneliness which makes you world collapse and makes you feel so small. We cause some apocalypses ourselves, because of indifference, arms trafficking, exploiting natural resources which we steal from our children.

We too must fight evil. The dragon that misleads with the logic of power and which, like consumerism, devours all hearts. St. Michael and his angels fight. Let us also go into combat. There is a lot that we can do.

Love is never inconsequential and razes walls. We must free the world from too much indifference and violence. If we do not love, we become accomplices of evil. And to fight evil, we must love. To do no evil is not enough, to be a witness, no matter how committed. Martyrs are like the Archangel Michael: they are no heroes, but people who love until the end. Monsignor Romero. The Dutch Father Frans, who stayed in Homs, in Syria, until his end, because he could not accept that a Muslim or Christian would starve to death. He fought. Evil killed him. But his light was not extinguished. In the darkness of Syria he is a star of hope. He helps everyone believe in humanity when the dragon makes men into beasts. His start shows that love is without limits and that the future starts with people like him. Father Frans is one of those who “have triumphed … by the blood of the Lamb and by the word to which they bore witness” (Rev. 12:11). When we fight evil, as the Gospel of Christ teaches us, meek and humble to all, we see and show how heaven is opened, and how the angels of God ascend and descend.

I was a stranger and I met an angel. He spoke to me gently and taught me a language I did not know. He made me feel as if I came home. I was naked and met an angel. He knelt by me because I could not get up from the gutter. He looked at me kindly and gave me a blanket to get warm. I was sick and met an angel. He was not afraid to take my hand, he kept coming back. He did not leave me alone when the storm of my sickness disrupted my entire life and I thought everything was over. I was starving and met an angel. He gave me to eat without making me feel like I owed him something. He treated me with respect, as if I was his father. I was in prison and met an angel. He was not ashamed for my sin. He treated me like a man. He like at me with confidence. He did not judge me. He smiled at me while knowing my guilt. We fight evil, like the Archangel Michael. We, and those who came after us, will, like the angels, see the light of heaven, the infinite love. In that intimate love for, the Gospel teaches us, we see heaven on earth, and earth becomes a piece of heaven.”