After almost 18 months, Paramaribo and the entire country of Suriname will once more have a bishop, and for only the second time in its almost 200-year history, the bishop is a native son. 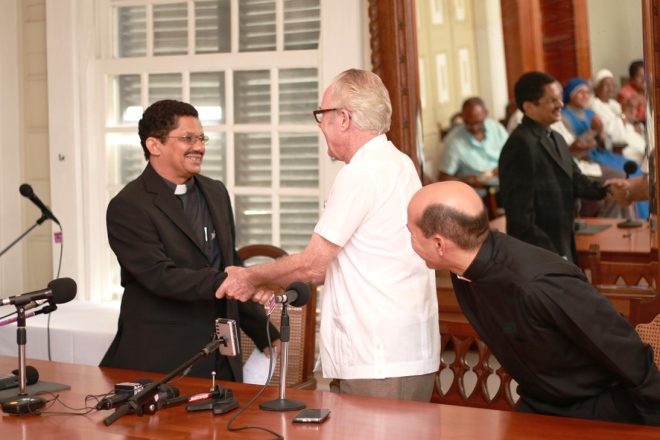 Bishop-elect Choennie was born in Suriname in 1958, He studied pedagogy at the University of Nijmegen in the Netherlands, and subsequently at the minor seminary in Port of Spain, Trinidad and Tobago. He received his licentiate in pastoral theology at the Catholic University of Louvain in Belgium, and was ordained to the priesthood in 1985. He served in various parishes in Paramaribo, became a member of the diocesan curia in 2001 and vicar general in 2005. This office was suspended upon the retirement of Bishop de Bekker in 2014.

The diocese reports that the new bishop will be consecrated in early 2016. According to canon law this must take place within three months after the appointment, in this case before 11 February. The identity of the main consecrator is unknown at this time, but it is a safe bet that emeritus Bishop de Bekker will be the one. After his retirement he remained in Suriname, living in the town of Groningen, west of Paramaribo.

Bishop-elect Choennie, as mentioned above, is the second bishop of Paramaribo born in Suriname. The first native bishop of Paramaribo was Msgr. Aloysius Zichem, who is now 82. He was bishop from 1971 to 2003. All other ordinaries have been Dutch, reflecting the colonial history of Suriname.

The Diocese of Paramaribo, which covers all of Suriname, is a suffragan diocese of the Archdiocese of Port of Spain in Trinidad and Tobago. It was established in 1817 as  the Apostolic Prefecture of Dutch Guyana-Suriname, promoted to an Apostolic Vicariate in 1842 and became the modern diocese in 1958.