The COMECE, short-hand for the Commission of the Bishops’ Conferences of the European Community, has elected their successor to Cardinal Reinhard Marx, who presided over the 29-member organisation, which “monitors the political process of the European Union in all areas of interest to the Church”, since 2012.

The seventh president since COMECE’s establishment in 1980 is Archbishop Jean-Claude Hollerich, the Jesuit archbishop of Luxembourg. Archbishop Hollerich’s mandate runs from 2018 to 2023. He has represented the Luxembourg Church in COMECE since 2011. His view on the role of COMECE in Europe is summarised in a statement he made during last month’s high-level meeting with the European Commission:  “Christians are not an interest group speaking in favor of religions, but European citizens committed to the construction of Europe, our common house”. 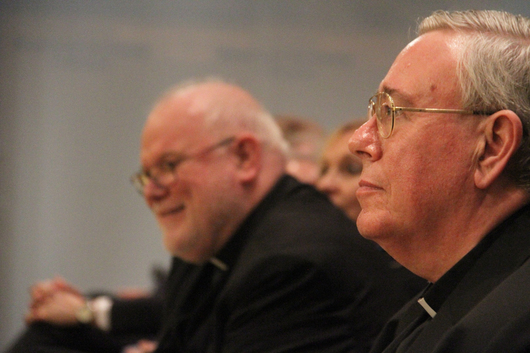 Together with the election of a new president, the rest of the highest leadership of COMECE was also renewed. Four new vice-presidents, one less than in the previous iteration, were elected: Bishop Noël Treanor (Down and Connor, Northern Ireland), Bishop Mariano Crociata (Latina-Terracina-Sezze-Priverno, Italy), Bishop Jan Vokál (Hradec Králové, Czech Republic) and Bishop Franz-Josef Overbeck (Essen, Germany). 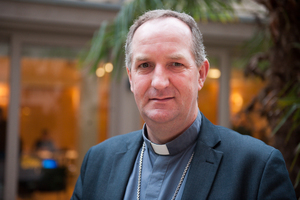 The Dutch delegate to COMECE, Bishop Theodorus Hoogenboom (at right), auxiliary bishop of Utrecht, was elected as president of the Commission on Legal Affairs. The new presidium was officialy launched at the Mass for Europe, celebrated in Brussels’ church of Notre Dame du Sablon.

Cardinal Marx hereby loses one of his multitude of offices. He still remains archbishop of München und Freising, president of the German Bishops’ Conference, member of the C9 group that assists Pope Francis in reforming the Curia, and the coordinator of the Council for the Economy, a part of the Curia in Rome.

COMECE strives to maintain close contacts with the institutions of the European Union, to monitor the political processes and developments and to communicate and inform both Church and politicians about their concerns and views, with a firm basis in the social doctrine of the Catholic Church.