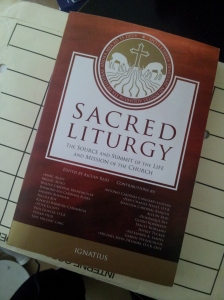 I was very happy to find this in the mail today: Sacred Liturgy: The Source and Summit of the Life and Mission of the Church, edited by Dom Alcuin Reid. It is the product of last year’s Sacra Liturgia conference, which I wrote about a few times.

It is quite the hefty tome, clocking in at 446 pages. The book collects the contributions from a great variety of authors; Bishop Marc Aillet, Walter Cardinal Brandmüller, Raymond Cardinal Burke, Bishop Dominique Rey and Archbishop Alexander Sample, to name but a few. The topics are equally varied, covering a wide range of the liturgical landscape. Here too, a random selection to give some idea: liturgical music, new evangelisation, liturgy and monastic life, sacred architecture, the role of the bishop in liturgy, catechesis and formation. There are also the homilies given over the course of the conference, one by Cardinal Cañizares Llovera and the other by Cardinal Brandmüller.

I have not always found it easy to find such theological resources in my neck of the woods, so I consider this book a welcome resource for my own personal theological education, small and interrupted by necessary daily commitments as it may be. And as such, it may also have its influence on the blog.

I had decided to not spend a lot of time on the work of the two censors who are working to investigate the songs used in the liturgy, but I think that it always helps to give some clarity on an issue which at least keeps certain Dutch Catholics occupied.

It’s always nice to see one’s own opinions confirmed by people in the know. Following Bishop Hurkmans of ‘s Hertogenbosch, Auxiliary Bishop Herman Woorts wrote a letter to the parish councils and emeritus priests in the Archdiocese of Utrecht to clarify the work of the censors of liturgical music. And since a bishop’s words rightly carry more weight than those of a random blogger, here is Bishop Woorts’ letter.

Brothers and sisters in Christ,

As Church we are a celebrating community. When we celebrate the liturgy there is frequent singing, both by choirs and the entire gathered assembly. A lot of time, care and attention is devoted to the music and songs in our churches, because we worship God with them, it feeds our faith and binds us together as a faith community. We are blessed with a wealth of songs, old and new, in Latin, Dutch or another language.

In service to the celebrations in our parishes and in other places where the faithful meet for the liturgy, publishers Gooi en Sticht and Berne Heeswijk publish booklets. It is the duty of the bishops in whose dioceses these publishers are located to make sure that the contents are in agreement with our Catholic faith and the liturgy of the Church. If the content is approved, they give their ‘imprimatur’ so that the booklets can be printed and distributed.

In order to be able to give their imprimatur, the bishops of Utrecht and ‘s Hertogenbosch (the dioceses in which the aforementioned publishers are located) have both appointed a ‘censor’. For the archdiocese I have been appointed as censor for the booklets from Gooi en Sticht. A censor must examine if the texts come from the altar missal, if the readings from Holy Scripture are printed in the prescribed translation and if songs and texts on the back are in concord with faith and morals.

The content of the songs is considered: are they theologically sound, in agreement with our Catholic faith? The suitability for the liturgy is considered (both in general and specifically for the Sunday in question). And the text os considered to see whether it clearly expresses what we confess and celebrate in our faith, and if it doesn’t cause confusion. All this will lead to the finding that a song is or is not suited for inclusion in aforementioned liturgy booklets. The finding that a song is or not suite for the liturgy is not dictated by personal preferences. The identity of the author also does not play a part.

Sadly, several media have reported that certain songs – from a specific author or not – have been declared forbidden or placed on an index. This is not the case. The censor is not appointed or able to do that. The suitability for the publications is per song the basis for the advice to the bishop to give his imprimatur. Some newspapers list specific songs which are said to have been rejected. These lists also included songs which have been approved for the liturgy or which have been included although they are not preferred. These media also named songs which were not forbidden, but which do await further scrutiny, since they require discussion before a verdict can be done about their suitability.

These media reports cause responses from people who are disappointed because something they hold dear is now said to be forbidden, but also from people who welcome a thorough consideration of the contents of the songs, because certainly not all songs are considered suitable by all.

We know there is or can be disagreement on the choice of what can and can not be included in the liturgy booklets. Convictions, visions, experience and emotions all play their part in that. I hope that this letter will give you some insight in the censor’s tasks and his methods. For every song the question is whether or not it is suitable for the Sundays for which the booklets are considered.

Diocesan vicar for the liturgy and censor for the Archdiocese

It’s not a letter that says much, really, but considering that it was written to comfort people and explain what is actually happening, it does its job. Unlike Father Cor Mennen, the other censor, and somewhat like Bishop Hurkmans, Bishop Woorts simply wants to explain and focusses on the importance of discussion. Of course, if you’re going to change things it is good to have the people who are going to be affected by that change on your side. But I hope that, if the difficult decisions need to be made – if, for example, some popular songs from Huub Oosterhuis are no longer allowed – , the bishops are able and willing to take these decisions. It will cause protests, yes, many people will be unhappy, but more important is the liturgy. It is an organic whole and can’t contain elements that deny part or all of the liturgy or the faith. Also important to realise in that respect is that the liturgy is educational: it teaches us about our faith, especially when our active (and receptive, as Father Z emphasises in his analysis of Bishop Marc Aillet’s talk) participation opens our heart and brings us into the mystery of God. Just as the liturgy is focussed on and about Him, so should the music contained in the liturgy be. Not that a song can’t have texts about the community off faithful or shared celebration, but if, as Father Mennen said, the songs could be just as easily an introduction to a birthday party, it has lost its liturgical focus. 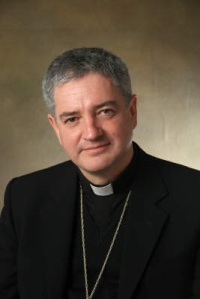 On 11 March this year, Bishop Marc Aillet of Bayonne spoke at a theological conference at the Pontifical Lateran University in Rome. The title of his talk was ‘The Wounded Liturgy’, and you may find an English translation here. It’s an interesting topic: Bishop Aillet compares the two main trends in the liturgy after Vatican II and stresses the need for a return, or a repair, of the wounded liturgy that we have now in many places in the world. Naturellement, the talk is also available in Dutch.

Thanks to the New Liturgical Movement for the English text.