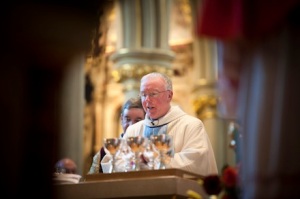 Yesterday saw the consecration of Bishop Philip Egan, the new bishop of Portsmouth in the United Kingdom. At the conclusion of the Mass, the eighth bishop of this Portsmouth made some remarks which several trustworthy sources have interpreted as a game plan for the future, not only in his own diocese, but all of England.

I would go even further, and suggest it is a good pointer for what our focus should be in all of Europe, not least in the Netherlands. Hence my translation.

“There is a Way – and it’s the Truth!
It’s the true Way that leads to Life, real life, life to the full, a life that never ends.
There is a Way, and it’s not a strategy, a philosophy or a package-deal.
This Way has a Name, because it’s a Person,
the only Person in human history who really did rise from the dead,
a Person alive here and now: Jesus of Nazareth, God the Son Incarnate.
He alone can save us.
He alone can give us the salvation our spirits crave.
He alone can reveal to us the Truth about God and about life,
about happiness and humanism, about sexuality and family values,
about how to bring to the world order, justice, reconciliation and peace.”

It may be difficult, it may be unpopular, but this is a truth that we can’t afford to forget if we want to have a future as Catholics, as Christians.

As Thomas Peters put it: “The Holy Spirit has guts”. A look at some of the most recent appointments in the Church (and rumours of future ones) shows as much. Although the decisions are of course made by prelates in the Curia and the Holy Father himself, as Catholics we firmly believe that the Holy Spirit guides and inspires them in their choices. And the choice these days seems to be for a firm stand for the faith and against the shamelessly promiscuous culture of today.

Just looking back over this past month, we have the appointment, albeit controversial in some circles) of Archbishop Gerhard Müller as prefect of the Congregation for the Doctrine of the Faith. Despite certain doubts about his suitability for such an important position, Archbishop Müller is close to the Pope Benedict in outlook and priorities, and will therefore prove a very close collaborator to the Holy Father.

There have also been a number of appointments to dioceses across the world that support the impression outlined above.

In Britain, “thoroughly sound chap” (per Fr. Tim Finigan, who doesn’t say things without good cause) Bishop Philip Egan was appointed to Portsmouth.

Further north, Bishop Philip Tartaglia of Paisley came to the see of Glasgow as the most populous Scottish diocese’s new archbishop, and mere days later he was taken to account for words that criticised a late politician’s homosexual lifestyle.

And today, staunch defender of marriage, Bishop Salvatore Cordileone (pictured at left) was appointed to the Archdiocese of San Francisco, in many ways the American liberal capital. Dubbed a “bombshell” by Rocco Palmo, the appointment of Cordileone can be considered the latest in a string of appointments that are part of what Father  often calls Pope Benedict’s ‘Marshall plan’ for the Church: an effort that must re-acquaint the Church with her own heritage and then live that out. For that, we faithful need bishops who are unafraid to clearly teach and defend what the Church has taught throughout the ages.

Additionally, and as an aside, there have also been bishops who have been taken to account for their mismanagement or failure to stand for the Catholic faith. Most recently, Slovakian Archbishop Róbert Bezák was removed as ordinary of Trnava.