Eight months after Archbishop Robert Zollitsch retired as archbishop of Freiburg im Breisgau, and was immediately appointed as Apostolic Administrator of that see, a successor has been found. In the case of Freiburg, which was never part of Prussia and is therefore not bound by the concordat between that former state and the Holy See, the cathedral chapter is the sole party to select candidates. The Apostolic Nuncio has the duty to investigate the candidates and what he finds is used by the Holy See to make a list of three names, of which at least one must be that of a native priest of the archdiocese. The cathedral chapter then elects one of the three priests on that list. The Pope subsequently confirms the election by appointing the new archbishop.

This entire process has now resulted in the 15th archbishop of Freiburg im Breisgau: Msgr. Stephan Burger. At 52 he is by far the youngest metropolitan archbishop of the country – the next youngest is Berlin’s Cardinal Woelki, at 57. Until now, Archbishop-elect Burger was the judicial vicar of the archdiocese, representing the archbishop in legal matters and leading the ecclesiastical court. Notable in this context is that the judicial vicar is also responsible for marital matters, most especially deciding on the validity of a marriage.

Archbishop-elect Stephan Burger was born in Freiburg, but raised in nearby Löffingen. He was ordained in 1990, after having studied philosophy in Freiburg and Munich. He spent his first years in parishes in Tauberbischofsheim, in the far north of the archdiocese, and in Pforzheim, halfway between Karlsruhe and Stuttgart. In 1995 he was appointed as parish priest in Sankt Leon-Rot, north of Karlsruhe. At the same time, between 2004 and 2006, he studied canon law at the University of Münster, completing it with a licentiate in canon law. From 2002 onwards, he was also active as defender of the bond in the ecclesiastical court, and since 2006 he was promoter of justice. A year later he took on the function he held until today. Upon the appointment of Bishop Michael Gerber as auxiliary bishop last year, Archbishop Zollitsch made some changes to the cathedral chapter, and Msgr. Burger joined in 2013.

Msgr. Stephan hails from a strongly Catholic family, with his parents having been active as Church musicians. His brother Hans took the religious name Tutilo when he entered the Benedictine Order, and he is now the Archabbott of Beuron Abbey. He will assist his brother at his consecration. 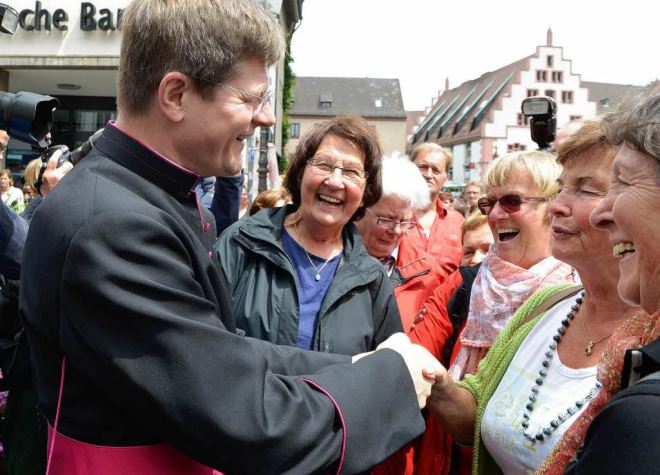 ^The ladies of Freiburg are already fond of their new archbishop.

The new archbishop’s appointment was received very positively in the Archdiocese of Freiburg im Breisgau. Mr. Alfred Gut, chairman of the parish council of Vogtsburg, where Archbishop-elect Burger has been active as a priest for the past ten years, said,”I couldn’t believe it when I heard it. I think it’s great. Stephan Burger is incredibly nice, open, sociable and has a ready ear for everyone.” While the news was welcomed, the new archbishop will be missed in the parishes of Kaiserstuhl, Burkheim and Vogstburg.

Although his work as the ecclesiastical courts was potentially dry, strict and serious, Msgr. Stephan has always seen it as pastoral work in the first place. Marriage annulments took up the major part of his work, but he saw it as his duty to “offer people in difficult situations an opportunity to talk in addition to the legal aspets. These people are part of our Church!” As archbishop, Msgr. Burger will obviously work from Freiburg, but he intends to be on the road when he can, to meet the people where they work and live.

Msgr. Burger’s consecration is planned fairly soon: on 29 June, the same day that the archdiocese is hosting a diocesan day,for all volunteers active in the churches, in the square in front of the Cathedral of Our Lady. Expect a major turnout of faithful, then. His predecessor, Archbishop Zollitsch, will be the main consecrator, while Bishop Uhl and Gerber, the archdiocese’s two auxiliaries, may be expected to serve as co-consecrators.

For his motto, the archbishop-elect took a line from the Letter to the Ephesians as inspiration: Christus in cordibus (Christ in the heart), from “s0 that Christ may live in your hearts through faith” (3:17).

Not only does this appointment continue the rejuvenation of the German episcopate, it also indicates that the appointments under Pope Francis seem to continue in the vein of those under Pope Benedict XVI. Archbishop-elect Stephan Burger is, it would seem, liturgically quite sound and well educated in canon  law. He also has pastoral experience, maintained ever since his first years as a priest.

“It is God who enters into a relationship with us, who holds out his hand to us, and therefore invites us to open ourselves to Him and enter into the covenant with Him.”

Words from Archbishop Robert Zollitsch’s homily on the occasion of the ‘last Sunday’s consecration of Bishop Michael Gerber, the new auxiliary bishop of the Archdiocese of Freiburg im Breisgau. The image of God extending His hand to His people is also illustrated in Bishop Gerber’s staff, as shown below:

The archbishop further expounded on the covenant of God, which is in essence a partnership.

“Dear sisters and brothers, both partners are needed in a covenant. We are not just the ones who receive God’s kindness and love. We are also in a position to respond to it and pass this love of God further and shine it out in our surroundings and environment! In the Gospel we have heard this promise from the mouth of Jesus: “You are the salt of the earth! […] You are the light of the world!” (Matt. 5:13,14). Yes, we may confidently say that we have something to give to the world! We may share our faith boldly and aggressively with the world! Because we know ourselves to be sustained in God’s covenant, we ourselves can support others who need our support! If we get involved in this covenant and make ourselves part of it, we can give the Church a human face and show the effect of God’s love!”

Bishop Michael Gerber, himself not adverse to physical exercise, drew a picture of two mountaineers, one going ahead , the other following. “Our Church needs both types of mountaineers and at times – as in true climb – the roles may also be reversed. Those who climb ahead and those who stand securely on solid ground.”

Bishop Gerber, who had pilgrimaged on foot from his hometown of Oberkirch to Freiburg’s Cathedral of Our Lady, a distance of some 75 kilometers, was consecrated by Archbishop Zollitsch and Freiburg’s other two auxiliaries, Bishop Rainer Klug and Bernd Joachim Uhl.