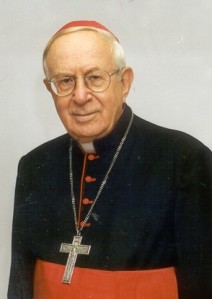 Called a “zealous pastor” by Pope Benedict XVI, Giovanni Cardinal Cheli swapped the temporal for the eternal last night, after 94 years of life spent for the most part in service to “the Gospel and to the Church”. The College of Cardinals, of which Cardinal Cheli was a non-voting member, now number 209, with 118 of them electors.

Giovanni Cheli was born in Turin and was ordained for the Diocese of Asti in 1942, after obtaining a doctorate in canon law from the Pontifical Lateran University. In Asti, he worked as chaplain to the youth section of Catholic Action, and also taught at the diocesan seminary. In 1952, after a time working in Rome and earning a licentiate in theology, Fr. Cheli entered the diplomatic service of the Holy See in 1952.

His first posting was in Guatemala, followed by Spain and Italy. In Madrid, he performed pastoral work in addition to his duties in the nunciature. In 1967, Fr. Cheli was assigned to the Council for Public Affairs of the Church. In 1973, he became permanent observer to the United Nations, an assignment which was confirmed again in 1976. In 1978, he was once of the few bishops consecrated by Pope John Paul I. Archbishop was renowned as an expert on the Church’s issues in relations with the Communist nations.

Archbishop Cheli was appointed as Pro-President of the Pontifical Commission for the Pastoral Care of Migrants and Itinerant People, which would became a pontifical council in 1988, still under the leadership of Archbishop Cheli.

Shortly before his retirement in 1998, Pope John Paul II made him a cardinal, with the deaconry of Santi Cosma e Damiano. Ten years later, Cardinal Cheli became a cardinal priest with the same title church.

Outspokenly critical on many issues, Cardinal Cheli protested the US invasion of Iraq in 2001, the age limits for cardinals and some of the curial appointments of Pope Benedict XVI.

Cardinal Cheli was among the five oldest cardinals of the Church.