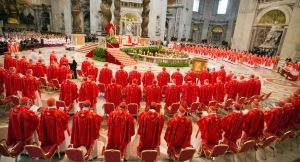 It would seem clear that one of these days (perhaps during tomorrow’s Angelus or Wednesday’s general audience) Pope Francis will announce who he intends to make cardinals in the consistory of 22 February. How many and who is anyone’s guess, but perhaps this is reason to take a look at how the College of Cardinals will change in 2014.

In order to max out the College at 120 electors, the Holy Father may appoint as many as 14 new cardinals or he may choose to appoint even more, as the upper limit established by Pope Paul VI is a flexible one (Pope John Paul II once made it as large as 135). The number of 14 is established by the fact that on the eve of the consistory there will be 106 electors. On 1 January, Raúl Cardinal Vela Chiriboga, emeritus Archbishop of Quito, turned 80. Below is the list of cardinals who will do likewise in 2014.

That is a total of 11 cardinals who will age out of the group of electors, which may mean, depending on how many new cardinals will be created in February, a next consistory could take place in the spring or summer of 2015. Of these eleven, seven were created by Pope John Paul II and the remaining four by Pope Benedict XVI.