(Note: This post has been edited after publication to correct some information about the office of Cardinal Protodeacon).

Just like he did almost exactly two years ago, Pope Francis promoted four Cardinal Deacons to the rank of Cardinal Priests. This is a right that cardinal have ten years after their creation, and while it does not mean any change in their rights and duties, it is a change in their position among their brother cardinals. Whereas the cardinal deacons rank below the cardinal priests, the newly promoted cardinals now take their place among those cardinals priests created in the same consistory as they were, according to the order in which they were announced.

This time around, four of the five cardinal deacons created in Pope Benedict XVI´s first consistory are elevated. The fifth, Agostino Vallini, was already promoted in 2009, following his appointment as vicar general for Rome a few months before.

The new cardinal deacons all keep their titular deaconries, the churches in Rome which they ceremonially head to reflect their basis in the clergy of Rome, which now become cardinal titles for the duration of the cardinals’ lives. The promoted cardinals, retired all, are William Cardinal Levada, Archbishop emeritus of San Francisco and Prefect emeritus of the Congregation for the Doctrine of the Faith; Franc Cardinal Rode, Archbishop emeritus of Ljubljana and Prefect emeritus of Congregation for Institutes of Consecrated Life and Societies of Apostolic Life; Andrea Cardinal Cordero Lanza Di Montezemolo, Archpriest emeritus of the Papal Basilica of St. Paul Outside-the-Walls; and Albert Cardinal Vanhoye, Secretary emeritus of the Pontifical Biblical Commission.

There are no practical changes that come out of these promotions. It is interesting to see that, although cardinal deacons are habitually promoted ten years after their creation (the most senior “class” now being that of November 2007), one cardinal deacon remains behind. He is Cardinal Renato Martino, created in Saint John Paul II’s last conclave of  October 2003. He is the most senior cardinal deacon and is thus the cardinal protodeacon. His most visible duty is the Habemus Papam following the election of a new Pope. In the past I had suggested that this is a duty only open to cardinal electors, but I was recently corrected about this.  Cardinal Martino would be free to pass on this duty to the next senior cardinal deacon if he is, for whatever reason, not up to it (he is 83, after all). The next cardinal deacon in line in 72-year-old Leonardi Sandri, the Prefect of the Congregation for the Oriental Churches.

It would seem clear that one of these days (perhaps during tomorrow’s Angelus or Wednesday’s general audience) Pope Francis will announce who he intends to make cardinals in the consistory of 22 February. How many and who is anyone’s guess, but perhaps this is reason to take a look at how the College of Cardinals will change in 2014.

In order to max out the College at 120 electors, the Holy Father may appoint as many as 14 new cardinals or he may choose to appoint even more, as the upper limit established by Pope Paul VI is a flexible one (Pope John Paul II once made it as large as 135). The number of 14 is established by the fact that on the eve of the consistory there will be 106 electors. On 1 January, Raúl Cardinal Vela Chiriboga, emeritus Archbishop of Quito, turned 80. Below is the list of cardinals who will do likewise in 2014.

That is a total of 11 cardinals who will age out of the group of electors, which may mean, depending on how many new cardinals will be created in February, a next consistory could take place in the spring or summer of 2015. Of these eleven, seven were created by Pope John Paul II and the remaining four by Pope Benedict XVI.

In a sede vacante, nothing, it seems, is permanent, not even the daily running of the Holy See. While Cardinals Bertone and Sodano, as Camerlengo and Dean of the College of Cardinals respectively, have certain specific duties, these do not extend as far as the duties that a Pope or the Curia in normal circumstances would have. We are all waiting, in this period, for normalcy to resume, but for that we need a visible head, a new Supreme Pontiff.

In the meantime, starting this morning, the cardinals are presented with the current affairs in the Church during their General Congregations and if a situation calls for it they can act together, or task one of their own to perform his duties as he would when there is a Pope. In the case of Cardinal Bertone, he is aided by three cardinals, one each from the orders of bishops, priests and deacons, in managing the Holy See. These three cardinals are appointed for three days only, another indication of the impermanence of their authority. For the first three-day period, which started yesterday and will end tomorrow, the names of Cardinals Giovanni Re, Crescenzio Sepe and Franc Rode were drawn by lot.

The actual decisions and actions undertaken during the General Congregations, and of course the conclave, are subject to an oath of secrecy that the cardinals made yesterday morning. Cardinal Wilfrid Napier (pictured above with Cardinal Collins before the start of the first Congregation), who is perhaps the most active tweeting cardinal at the moment, told his followers this morning: “Given that Pledge of Confidentiality covers matters discussed in General Congregations, only very general comments can be made. Keep praying.” Several cardinals have already shut down their Twitter account or gone radio silent until after the conclave. A full list of twittering cardinals can be found here.

But in the meantime, while much may get done, we are still awaiting the arrival of the final cardinal electors. Only after they arrive can a date for the conclave be decided upon. Until then, with the final arrived expected to be Hong Kong’s Cardinal John Tong Hon sometime tomorrow, the cardinals will continue meeting once a day in the morning.

Today, all the cardinals of the Church received the official letter summoning them to Rome. Cardinal Sodano, as dean of the College of Cardinals, signed the letter. Cardinal Simonis, emeritus archbishop of Utrecht, was one of the cardinals who received the summons, although, like many others, he is already in Rome. The image below shows the letter in the hands of the cardinal, who won’t  be able to vote in the conclave, as he is over the age of 80. But all cardinals, elector or not, are expected to take their responsibilities in managing the goods and needs of the Church and the faithful during the sede vacante, as well as preparing for the conclave.Cardinal Sodano’s letter invites the cardinals to the first two General Congregations on Monday. A date for the conclave may be decided upon then, but that is by no means certain. All indications are that the cardinals want time to talk and think.

The electors number 117, although two of them have chosen to remain at home. So here they are, the 115 cardinal electors who will soon be entering the conclave, which they will not be leaving until they have elected a new Supreme Pontiff. As Emeritus Pope Benedict (how odd it is to write that!) said yesterday morning, the new Pope is among them. 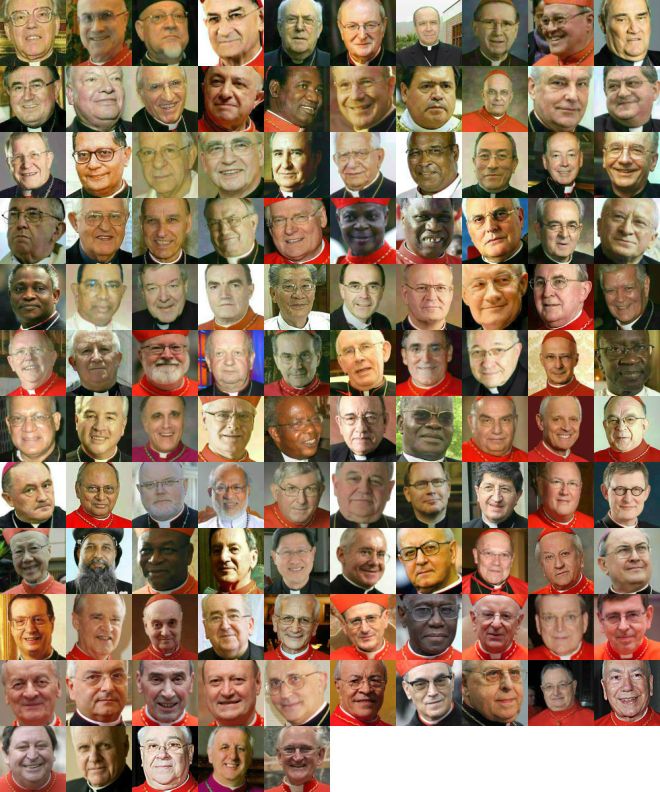 A short primer on who’s who among the electors, ordered by precedence (and from left to right and top to bottom, starting at top left and ending at bottom right, in the collage above):

Who we will see in white on the balcony of St. Peter’s sometime later this month remains anyone’s guess. Only Our Lord knows and, as Cardinal Pell said, it is up to the electors to find out.

The Congregation for Institutes of Consecrated Life and for Societies of Apostolic Life, generally referred to as the Congregation for Religious, the curial department responsible for all men and women in religious congregations, has gotten a new prefect. Succeeding Franc Cardinal Rodé, who retires at the age of 76, is Archbishop João Bráz de Aviz, until now the archbishop of Brasilia.

With his new appointment, he is one of only two South-American prefects of a congregation, despite the. relative importance of South America in the Catholic world. The other prefect is Italian-Argentinian Leonardo Cardinal Sandri, who heads up the Congregation for the Oriental Churches.