New revelations about sexual abuse, with the knowledge of a significant number of bishops no less, in the Catholic Church in the Netherlands? If certain headlines are to be believed, that is indeed the case. Reality, however, disagrees somewhat. 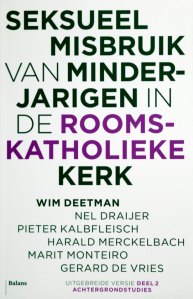 It all started with this article in major daily NRC. In it, reporter Joep Dohmen lists which bishops were in some way involved (peripherally or directly) in abuse cases between 18945 and 2010. At the bottom of his article he lists his sources, two of which are the report of the Deetman Commission and the commission collecting claims of abuse in the Church. Both are the result of the independent investigation which was commissioned by the Dutch Bishops’ Conference and the Conference of Dutch Religious in 2010. The third source is a study by NRC itself.

This, together with the dates mentioned, already shows that the news is not new. The majority of cases took place decades ago, and the 20 bishops listed by Mr. Dohmen are all no longer active (in fact, 14 of them are deceased). All of the cases mentioned have been known at least since 2011.

Having all the facts straight can only be good, and the article in NRC at least serves as a good reminder for the Church to keep working for the victims and to do everything to prevent future abuse of minors and vulnerable adults in the Church, and to see that the perpetrators are punished, if at all possible (after all, the law can do little against deceased persons, and is in many cases often limited by the statute of limitations). However, the NRC article has been labelled by some as populist. This in part because some of the facts presented are not necessarily the whole story. For example, the accusations against Bishop Jo Gijsen (bishop of Roermond from 1972 to 1993) have been challenged in court, with the judge determining that the evidence against the bishop was accepted all too readily and does not hold up in a court of law, and there are cases in which a bishop accepted the appointment of a bishop from another diocese without having been informed about his background.

That said, all of the above does not take anything away from the serious nature of sexual abuse, be it in the Church or elsewhere. No longer does any bishop have the excuse of claiming he couldn’t have known, or resort to simply transferring an abusive priest. Any bishop caught doing that should rightly be charged with aiding an abuser, and be punished accordingly.

However, this is the luxury of hindsight. As former spokesman of the bishops’ conference Jan-Willem Wits states in his excellent commentary on the article, such was the simple and painful reality:

“What I personally do not believe, and yet somehow read in the NRC pieces, is that bishops were a sort of leaders of a virtual criminal organisation which consciously closed its eyes to priests who could not control themselves. Of course the fear of a damaged reputation will have played its part, but I have seen a lot of shame and a lot of naivety. Especially the transferring of priests with abuse in their genes has, in hindsight, been unbelievably stupid and actually unforgivable. Now we know that the chance of recidivism is so very great that, even with therapy, let along after apologies and confession, it is only a matter of time for the bomb to blow.”

Hindsight is 20/20, they say. No one can change the past. But it can – and must – be a lesson. Lets hope that the lesson is being received.

Next Wednesday, the 4th of April, looks to be an important day in the search for facts in the ongoing abuse crisis, and more specifically the recent news about past castrations of minors in the care of the Church. On that day, the parliamentary Commissions for Justice and Security and Health Care, Welfare and Sports will hear journalist Joep Dohmen (pictured), who broke the news in the NRC daily, and Wim Deetman, who led last year’s extensive investigation of sexual abuse of minors within the Church.

The Note that has been prepared by the Deetman commission is an extensive refutation of claims made by Mr. Dohmen in NRC, not only about the castrations, but also about the involvement of former Prime Minister Victor Marijnen (prime minister from 1963 to 1965), who allegedly tried to have facts hushed up. The Note is built on the nature of the castration claims, which were very incomplete and contradictory, and most importantly counters claims that the Deetman investigation was incomplete.

What Mr. Dohmen intends to say on the 4th is not yet known, but he will undoubtedly defend his own research and claims. The combined parliamentary commission will hear Mr. Deetman at 10 am and Mr. Dohmen at 11.

A shocking report (to me at least) in the news today. Bishop Ad van Luyn was aware of cases of sexual abuse in the time that he was provincial superior of the Salesian order in the Netherlands. His spokesperson said so today. He also says to have taken taken at the time.

This is part of the official statements from the Dutch bishops’ conference:

Following the media reports about Msgr. van Luyn this afternoon, the Secretariat RC Church feels required to relate the following to you, as a correction.

On 10 March, Mr. Joep Dohmen asked if Msgr. van Luyn was aware of an internal investigation in 1967. The bishop made it know he had no managerial position in 1967 and that these cases were handled by the provincial with his vicar and the superior of the house in question with his vicar. On 24 March the question was asked if Msgr. van Luyn knew in general of cases of abuse within his congregation. That was the first this question was asked in a general context.

Between 1975 and 1981, Msgr. van Luyn, as provincial superior did receive news of several cases and took steps against them. Wereldomroep now suggests that the bishop only reveals this after much pressure and seems to be looking for sensation through suggestive reporting.

In light of the pending independent investigation we will refrain from further comments.

How is this shocking? Not because of the fact that abuse cases were known in the 1970s. Some were bound to have come to light and be dealt with internally. What does amaze me is the apparent naiveté in dealing with the media. Saying that a media outlet was not specific enough, that they should have asked better questions? Seriously? How is that an excuse?

Full openness, not hiding behind words and definitions, that is what is needed now. This is a very serious issue, that could potentially be very damaging to the Church. We – all the faithful, including the bishops – must be as open as possible. The truth will come out, certainly with an independent investigation.

I don’t enjoy pointing these things out, as some bloggers do. We are all in this together, and personally attacking, even slandering bishops serves no purpose at all, except to divide us. But bishops are people too, and they make mistakes. Msgr. van Luyn made a big one.

I am looking forward to being away from the blog this weekend. This has not been a good week.