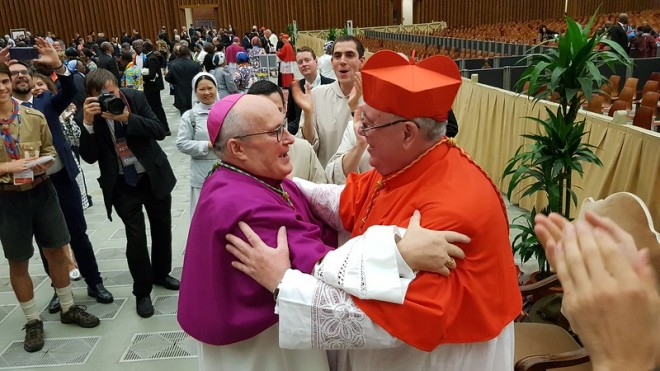 A joyful photograph reflecting the historical changes at the top of the Archdiocese of Luxembourg. Last week, Bishop Leo Wagener (left), became the archdiocese’s first auxiliary bishop, and yesterday Archbishop Jean-Claude Hollerich (right) was created the first cardinal in the country’s history.

Cardinal Hollerich, who also leads the Commision of the Bishops’ Conferences of the European Community (COMECE), consecrated Bishop Wagener on 29th September. The latter’s appointment is undoubtedly related to Cardinal Hollerich’s European duties, while the red hat is at least in part a sign of support for the Catholic community in the small grand duchy. The developments of the last week were certainly momentous.

As of yesterday, each country in the Benelux has its own resident cardinal: Willem Eijk of Utrecht, Jozef De Kesel of Mechelen-Brussels and now Jean-Claude Hollerich of Luxembourg. The latter two were created by Pope Francis, while Cardinal Eijk’s red hat was given to him by Pope Benedict XVI.

Cardinal Hollerich was one of 13 cardinals created yesterday. The College of Cardinals now has 225 members, of which 128 are under the age of 80 and will thus have duties in Rome and can take part in a conclave for the election of a new pope. The newest cardinals, with their title churches, are:

In the past there has been no hesitation to create new cardinal titles despite the availability of existing ones, but this time around only one new title church has been added: Sant’Egidio for Cardinal Zuppi. A sensible choice as the cardinal is a member of the movement with the same name. Other notable titles given are Sant’Anastasia for Cardinal Dal Corso – until this year the title of Cardinal Godfried Danneels – and Santi Aquila e Priscilla – Cardinal García Rodríguez is the archbishop of Havana, and the previous holder of the title church was his predecessor in the Cuban capital. Cardinal Hollerich’s title church was most recently held by Cardinal José Pimiento de Rodriguez, for a while the oldest cardinal in the world.

Considering Pope Francis’ habit of choosing cardinals from the peripheries, from countries with small Catholic communities or on the fringes of global affairs, the list of nationalities of cardinals has become a lenghty one. Most cardinals are the only ones from their country, while others have a fair number of countrymen in the College of Cardinals. Starting with the countries with the largest number of cardinals, the list is as follows:

So the Italian influence in the College of Cardinals is still great as is that of Europe in general, but this is balanced in the first place by the cardinals from North and South America, but also by the increasing number of far-flung countries from the Caribbean to the Pacific. Pope Francis aims to make the College of Cardinals, which not only elects his successor, but also works with him in the Roman Curia for the global church, to be a reflection of that world. With today’s consistory, he has taken another step in that direction.

Pope Francis yesterday surprisingly announced that he will create 13 new cardinals on 5 October. Surprisingly, because the numbers do not really suggest the ned for a consistory at this time. There are currently 118 electors, cardinals who are active in the Roman Curia and who can vote in a conclave to elect a new Pope, with only 8 aging out between now and the end of 2020. It is clear, however, that Pope Francis prefers having too many rather than too few cardinals, and so habitually ignores the rule that there can only be a maximum of 120 electors (he’s not the only Pope to have done so, however: Pope St. John Paul II once expanded their number to a massive 135).

And, as ever, he also aims for a representative College of Cardinals. In this round, he selects prelates from Luxembourg and Morocco, countries which have never had a cardinal before, but also more traditional cardinalatial sees such as Bologna, Havana and Kinshasa.

And again we see the fallout of recent papal visits abroad. Hence cardinals from Lithuania (visited in September of 2018) and Morocco (March 2019).

After 5 October, there will be 215 cardinals, with 128 electors. Two days later, the latter number will drop again, as Cardinal-designate Ambongo Besungu’s predecessor in Kinshasa, Cardinal Laurent Monsengwo Pasinya, reaches the age of 80.

Of these, cardinals-designate Fitzgerald, Tamkevicius and Dal Corso, being 80 or older, are ineligible to participate in a conclave. Their selection must therefore be seen as a recognition for their work for the Church and the people in their pastoral care.

Cardinal-designate Czerny is also the first elector who is not yet a bishop upon his selection. Priests who are not (yet) bishops can be made cardinals, but this usually only happens for non-electors. As a Jesuit, Msgr. Czerny will probably request dispensation to not be ordained as a bishop before his creation as cardinal. This is par of the course for Jesuits who are not yet made bishops for other reasons (such as Pope Francis, who was ordained a bishop in 1992 to serve as auxiliary bishop of Buenos Aires). 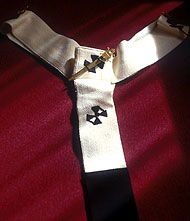 Today, the feast of Saints Peter and Paul, Pope Francis will once again be giving out he pallia to the world’s new metropolitan archbishops (or to their representatives). The actual imposition of the woolen band signifying the bond with the Rome and the world Church will take place in the archdioceses at a date of the prelates’ own choosing, per the changes introduced last year.

There are 27 new archbishops in this round, all appointed between 29 June 2015 and today. Here’s the list:

Most of the archbishops will still come to Rome, even if there is no official imposition taking place. Among these is Mechelen-Brussels’ Jozef De Kesel, the only archbishop from northwestern Europe in this year’s relatively small crop.

In his homily on last year’s feast, Pope Francis entrusted the archbishops  with a call to prayer, faith and witness:

“The Church wants you to be men of prayer, masters of prayer; that you may teach the people entrusted to your care that liberation from all forms of imprisonment is uniquely God’s work and the fruit of prayer; that God sends his angel at the opportune time in order to save us from the many forms of slavery and countless chains of worldliness. For those most in need, may you also be angels and messengers of charity!

The Church desires you to be men of faith, masters of faith, who can teach the faithful to not be frightened of the many Herods who inflict on them persecution with every kind of cross. No Herod is able to banish the light of hope, of faith, or of charity in the one who believes in Christ!

The Church wants you to be men of witness. Saint Francis used to tell his brothers: “Preach the Gospel always, and if necessary, use words!” (cf. Franciscan sources, 43). There is no witness without a coherent lifestyle! Today there is no great need for masters, but for courageous witnesses, who are convinced and convincing; witnesses who are not ashamed of the Name of Christ and of His Cross; not before the roaring lions, nor before the powers of this world. And this follows the example of Peter and Paul and so many other witnesses along the course of the Church’s history, witnesses who, yet belonging to different Christian confessions, have contributed to demonstrating and bringing growth to the one Body of Christ. I am pleased to emphasize this, and am always pleased to do so, in the presence of the Delegation of the Ecumenical Patriarchate of Constantinople, sent by my beloved brother Bartholomew I.

This is not so straightforward: because the most effective and authentic witness is one that does not contradict, by behaviour and lifestyle, what is preached with the word and taught to others!

Teach prayer by praying, announce the faith by believing; offer witness by living!”