This week, the Diocese of Münster saw the its full roster of auxiliary bishops, no less than five of them, completed again. And like the last time, it is the rector of the Marian Shrine of Kevelaer who gets to wear the mitre. 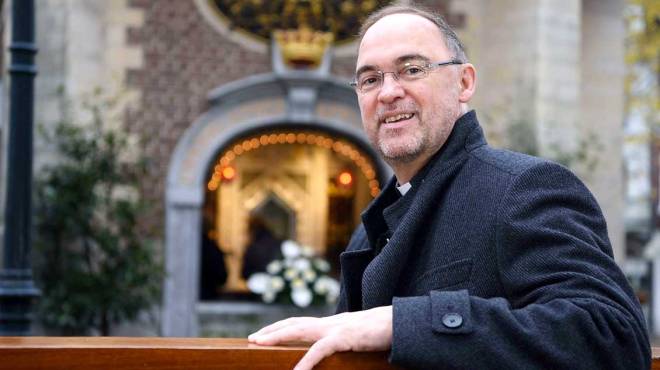 ^Rolf Lohmann, the newest auxiliary bishop of Münster, before the chapel in Kevelaer holding the image of Our Lady, which launched alomst four centuries of pilgrimages.

Msgr. Rolf Lohmann was appointed on Tuesday following the transfer, in April of last year, of Bishop Heinrich Timmerevers to Dresden-Meißen. As mentioned before, there is a strong tradition in German dioceses for the vicars of the various pastoral areas to be made auxiliary bishops. Münster has five of these pastoral areas, and thus also five auxiliary bishops.

Bishop-elect Lohmann will be assigned to the pastoral area of Niederrhein, the southwestern-most part of the diocese, adjacent to the Dutch diocese of Roermond and ‘s-Hertogenbosch (and a small part of the Archdiocese of Utrecht). This includes the old cities of Kleve, Wesel and Xanten, as well as Kevelaer, the major pilgrimage site dedicated to the Blessed Virgin in northwestern Germany, which continues to draw large numbers of pilgrims.

The new auxiliary bishop was ordained in 1989 and served in various parishes until 1997, when he was appointed as rector of the shrine of St. Ida in Lippetal-Herzfeld. In 2007 he became a member of the cathedral chapter and in 2011 he succeeded the then newly-appointed auxiliary Bishop Stefan Zekorn as rector of Kevelaer.

Bishop-elect Lohmann enjoys a close friendship with another auxiliary bishop of Münster, Wilfried Thiesing, who he succeeds in Niederrhein. Bishop Thiesing now resides in Vechta as episcopal vicar for the northern Oldenburg area, but comes from Niederrhein. The friendship between Thiesing in the north and Lohmann in the south should serve to bring the diocese closer together, Bishop Thiesing joked.

The appointment comes at a special time for Msgr. Lohmann. As rector of Kevelaer he has been preparing and looking forward to the 375th anniversary of the Kevelaer pilgrimage, to be celebrated at the end of May and beginning of June. With his new assignment, his role in that celebration will be different than he expected. Bishop-elect Lohmann considers the pilgrimage to be the future of the Church. As bishop, he wishes to continue contributing to a renaissance of pilgrims.

As bishop, Msgr. Lohmann will hold the titular see of Gor, in modern Tunisia. A date for his consecration is yet to be announced, but it will robably be before the summer holidays. Canon law dictates that a bishop must be consecrated within three months after the announcement of his appointment.

Last Wednesday I joined the annual pilgrimage of our parish to the Marian shrine at Kevelaer. I’d never been there but I had heard good stories, so once the opportunity presented itself, I went. There was a full busload, almost 60 people, who went to the popular German town, where Dutch merchant Hendrik Busman built a small chapel in 1641. A prayer card of Our Lady of Luxembourg was later bought by his wife and is now the centre of the devotion at Kevelaer. Both the construction of the chapel and the purchase of the card were instigated by the couple hearing the voice of the Blessed Virgin.

Nowadays, the town is centered around the old chapel with the prayer card, two churches, one of them a basilica, a sacrament chapel and a rectory. Many thousands of pilgrims visit Mary at Kevelaer every year.

Our one-day pilgrimage was started with a Mass offered in concelebration by Bishop de Korte and Father Wagenaar. I was initially supposed to have served, but there were no cassocks in my size, sadly. German men are generally a bit shorter than me, it seems. Instead, I took care of the collection. There was time to look around in the various churches as well as the many shops selling devotionals, before we had a warm lunch at the rectory. In the afternoon we prayed the Stations of the Cross in the park devoted to that exact purpose.

I left Kevelaer with a very positive impression. The atmosphere is very warm in a generally spiritual way and once you immerse yourself in it really feels blessed. I also bought two small medals of St. Joseph, my baptismal saint, who has been a great help recently, even without my initial knowing. I now wear one around my neck, on a silver chain that Brother Hugo was kind enough to give me. The other is worn by my girlfriend, who is responsible for asking St. Joseph for some assistance in the first place.

Last Friday, Fathers Arjen Bultsma, Victor Maagd and John de Zwart led some 150 of their parishioners on a pilgrimage to the German Marian shrine at Kevelaer. The website of the Diocese of Groningen-Leeuwarden presents this as the revival of an old tradition, and it would seem that the three priests plan another pilgrimage next year. There is a photo report of here, One photo struck me. Taken from the choir loft it shows people coming forward to receive Communion at the communion rail. 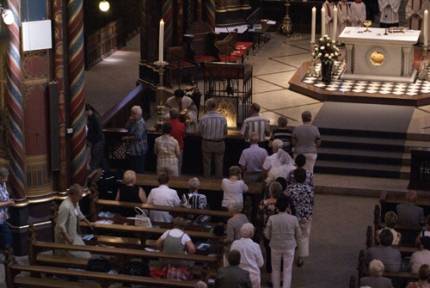 While not unknown in certain parishes in the diocese, this way of receiving is rare enough to be remarkable, certainly on a pilgrimage like this, which included people of all generations.

I happen to know the three priests in question as liturgically fairly sensible men (some more than others, but name me any group of three people in which all are identical), but it was certainly nice to see. And yes, I do notice that not everyone in the photo receives kneeling. But, as they say, brick by brick, and as long as reception on the hand is a valid way of receiving I won’t tell anyone off for doing it.