Almost one year ago, an ecumenical prayer service in a Catholic cathedral to open a gay pride festival, and including a blessing by the bishop, was a bridge too far. This year, more exactly last night, the Diocese of ‘s-Hertogenbosch co-hosted the first of three dialogue meetings about faith and sexual diversity. Participating in the private meeting, characterised by an atmosphere of “security, openness and honesty”, were Bishop Gerard de Korte, cathedral administrator Fr. Geertjan van Rossem as well as representatives from the churches in the city of ‘s-Hertogenbosch and from the political world. 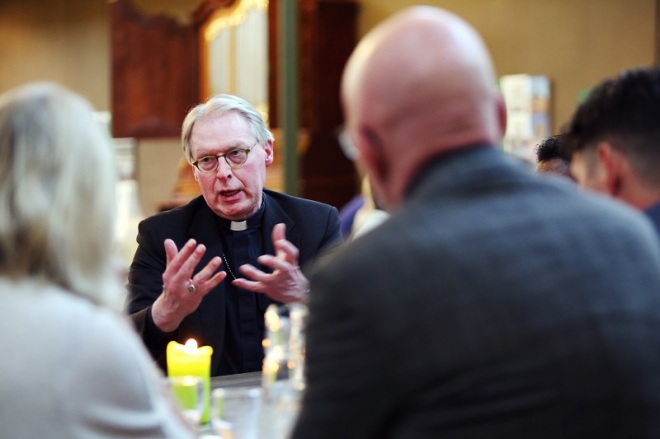 The meeting was promised by the bishop as he announced last year’s plan to host the ecumenical prayer service on Pink Saturday at the cathedral of St. John. Those plans were later cancelled after significant protests, and the service was relocated to the Protestant Grote Kerk. Fr. Van Rossem did participate in it, but Bishop de Korte did not.

The focus of the meeting was to foster understanding. The participants spoke in groups of ten, and the bishops joined several of these groups. “What struck me in the conversations was the willingness to really listen respectfully to each other’s experiences. The participants were courteous, did not look for discussion, but spoke about what they had experienced themselves.”

Mr. Ivo van Harmelen, former Pink Saturday program manager and co-organiser of the dialogue meeting, said: “From the conversation the wish to remain in contact manifested itself especially. First show love, begin a dialogue and try to find each other in that way.” As such, the meeting had no ideological character. It was intended to listen, to create some form of connection and understanding, which can be the basis for further developments.

The interests of Christians and people who identify themselves in sexually different ways are often strained and usually diametrically opposed. The contacts between, if any, are often hostile and judgmental. But both also want to convince the other of their beliefs. Fighting and condemnation will not do that. If there is any hope of dialogue and understanding, there must be a foundation first. These meetings are an attempt to achieve that.

Two more meetings are planned for tonight and tomorrow evening, between faithful, pastors and representatives of various sexual diversity communities.