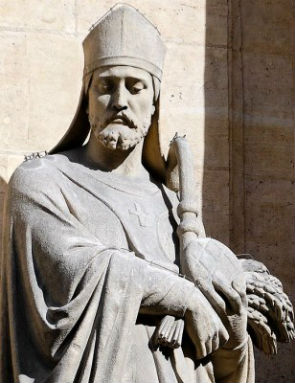 The Saint’s Name Generator threw up a new saint for the year of 2017. He is an early medieval French bishop, with an associated miracle story, as medieval saints usually have.

Saint Honoratus of Amiens was the reluctant bishop of that city in the 6th century. The story goes that a ray of divine light and holy oil appeared on his head when he was chosen to be bishop. When word of his election reached his family home, his old nursemaid, who was baking bread at the time, said that he would no more be a bishop then the peel she was using for baking would turn back into a tree. Of course, the peel did just that, and the resultant tree was still being shown to pilgrims in the sixteenth century.

In imagery, he is represented as a bishop with a baker’s peel, a large host, three hosts on a baker’s shovel, or loaves of bread.

Not a saint associated with blogging, communication or anything similar, but there is a link with the Bread of Life. As Catholics, the source and summit of what we say and do is found in that Bread of Life, who is Christ.