God, who said, “Let light shine out of darkness,” has shone in our hearts to give the light of the knowledge of the glory of God in the face of Christ.

Veronica was one of the women who had followed Jesus, who understood who he was, who loved him; she suffers to see him suffer. Now, standing nearby, she sees his face, that countenance which had so often touched her soul. She sees it distraught, marred and covered with blood, yet ever meek and humble.

He cannot long endure. She wants to relieve his suffering. She takes a cloth and tries to wipe the blood and sweat from that face.

In our lives we have had occasion at times to wipe the tears and sweat of those who suffer. Perhaps we have assisted a terminal patient in the wards of a hospital, or helped an immigrant or someone looking for work, or listened to someone in prison. And in trying to ease their suffering, we may have wiped their face simply by looking upon them with compassion.

And yet, all too seldom do we remember
that in each of our brothers and sisters in need
you, the Son of God, are hidden.
How different would our lives be
if we would but remember this!
Little by little we would become aware of the dignity
of every man, woman and child living on the earth.
Each person, beautiful or not, gifted or not,
whether newly conceived in a mother’s womb
or advanced in age, represents you, Jesus.
And not only. Each of our brothers and sisters is you.
Looking upon you, utterly abased on Calvary,
we will understand with Veronica
that in every human being we can recognize your face.

Last night we commemorated the betrayal of Jesus Christ by Judas and His capture by Sanhedrin officials. All this following a night He spent in prayer in Gethsemane, with the Father and a couple of sleepy Apostles for company. In the night, He prayed for His people and also for Himself. His fear at what He know was to come made Him ask His Father to let the cup pass from His lips, but “not my will, but yours”.

Today we walk the Stations of the Cross, the fourteen stages of Christ’s death on the Cross, from His conviction by Pontius Pilate to His burial. These fourteen stations are illustrated below. The photos are details from the station in the St. Joseph cathedral in Groningen (originally taken for a different Good Friday project for which I lacked the time, and I hope you’ll excuse the bad lighting conditions in some) and the texts are snippets from prayer sand meditations written for the Stations of the Cross at the Colosseum in Rome, written by Camillo Cardinal Ruini, which you can read in full here. 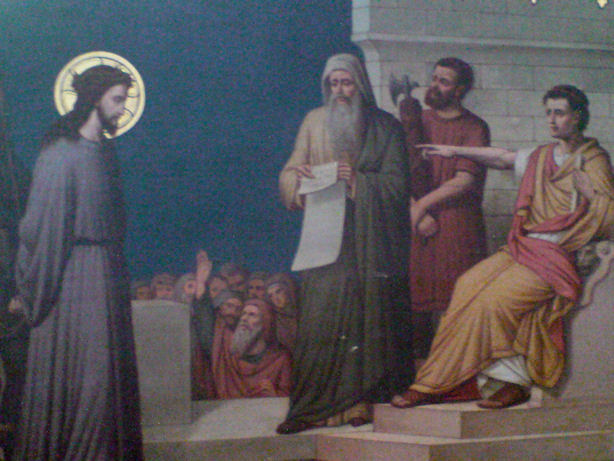 “Jesus died for our sins. And on an even deeper level, he died for us, he died because God loves us and he loves us even to giving us his only Son, that we might have life through him (cf. Jn 3:16-17)”. 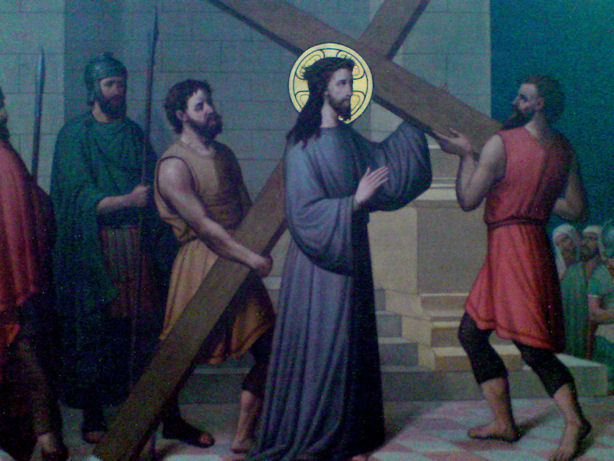 “[I]n our conscience shines the light of goodness, a light which in many cases is bright and guides us, fortunately, in our decisions. But often the opposite occurs: this light becomes obscured by resentment, by unspeakable cravings, by the perversion of our heart. And then we become cruel, capable of the worst, even of things unbelievable”.

“Jesus did not refuse physical suffering and thus he entered into solidarity with the whole human family, especially all the many people whose lives, even today, are filled with this kind of pain. As we watch him fall beneath his cross, let us humbly ask him for the courage to break open, in a solidarity which goes beyond mere words, the narrowness of our hearts”. 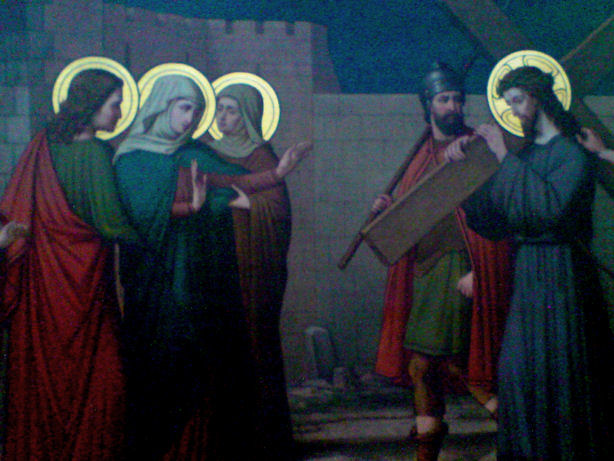 “Mary becomes the Mother of us all, the Mother of every man and woman for whom Jesus shed his blood. Here motherhood is a living sign of God’s love and mercy for us. Because of this, the bonds of affection and trust uniting the Christian people to Mary are deep and strong. As a result, we have recourse to her spontaneously, especially at the most difficult times of our lives”.

“[W]hat seemed at first to be merely a stroke of bad luck or a tragedy not infrequently is shown to be a door which opens in our lives, leading to a greater good. But it is not always like this: many times, in this world, tragedies remain simply painful failures. Here again Jesus has something to tell us: after the cross, he rose from the dead, and he rose as the firstborn among many brethren (cf. Rom 8:29; 1Cor 15:20). His cross can not be separated from his resurrection. Only by believing in the resurrection can we meaningfully advance along the way of the cross”.

“In the suffering face of Jesus we […] see another accumulation: that of human suffering. And so Veronica’s gesture of pity becomes a challenge to us, an urgent summons. It becomes a gentle but insistent demand not to turn away but to look with our own eyes at those who suffer, whether close at hand or far away. And not merely to look, but also to help”.

“[L]et us ask God, humbly yet confidently: Father, rich in mercy, help us not to add more weight to the cross of Jesus. In the words of Pope John Paul II, who died five years ago tonight: “the limit imposed upon evil, of which man is both perpetrator and victim, is ultimately Divine Mercy” (Memory and Identity, p. 60)”.

“It is Jesus who takes pity on the women of Jerusalem, and on all of us. Even as he carries the cross, Jesus remains the man who had compassion on the crowd (cf. Mk 8:2), who broke into tears before the tomb of Lazarus (cf. Jn 11:35), and who proclaimed blessed those who mourn, for they shall be comforted (cf. Mt 5:4)”.

“In our efforts to identify ourselves completely with Jesus as he walks and falls beneath the cross, it is right for us to have feelings of repentance and sorrow. But stronger still should be the feeling of gratitude welling up in our hearts”.

TENTH STATION – Jesus is stripped of His garments

“As we look upon Jesus naked on the cross, we feel deep within us a compelling need to look upon our own nakedness, to stand spiritually naked before ourselves, but first of all before God and before our brothers and sisters in humanity. We need to be stripped of the pretence of appearing better than we are, and to seek to be sincere and transparent”.

ELEVENTH STATION – Jesus is nailed to the cross

“How many times, when we are tested, we think that we have been forgotten or abandoned by God. Or are even tempted to decide that God does not exist. The Son of God, who drank his bitter chalice to the dregs and then rose from the dead, tells us, instead, with his whole self, by his life and by his death, that we ought to trust in God. We can believe him”. 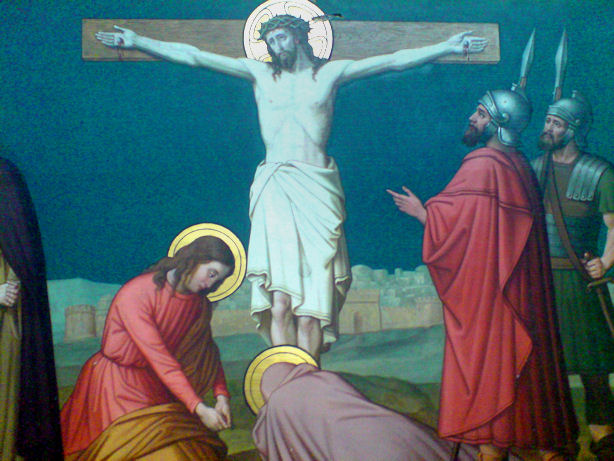 “In truth, nothing is as dark and mysterious as the death of the Son of God, who with God the Father is the source and fullness of life. Yet at the same time, nothing shines so brightly, for here the glory of God shines forth, the glory of all-powerful and merciful Love”. 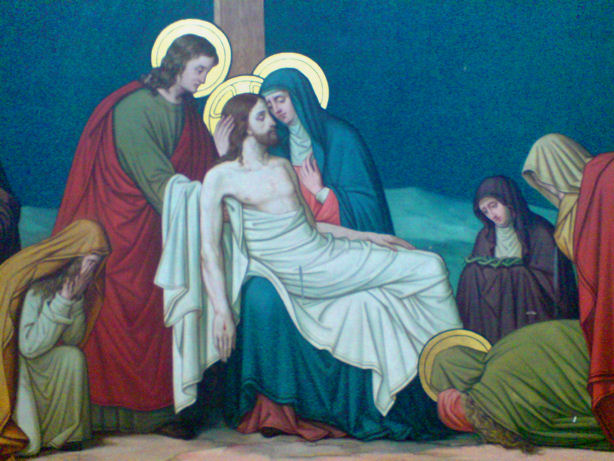 “As we remember that Mary, standing at the foot of the cross, also became the mother of each one of us, we ask her to put into our hearts the feelings that unite her to Jesus. To be authentic Christians, to follow Jesus truly, we need to be bound to him with all that is within us: our minds, our will, our hearts, our daily choices great and small”.

FOURTEENTH STATION – Jesus is placed in the tomb

“Let us halt in prayer before the tomb of Jesus, asking God for the eyes of faith so that we too can become witnesses of his resurrection. Thus may the way of the cross become for us too a wellspring of life”.