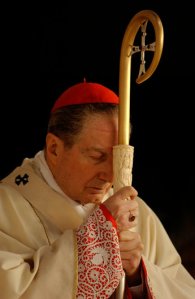 Mere minutes ago, after Parkinson’s disease had confined him to a hospital bed, Carlo Maria Cardinal Martini passed away, 85 years old. The leader of the Church’s ‘loyal opposition’, a voice for liberalism on many issues, Cardinal Martini was also an erudite scholar of Scripture, papabile in many eyes and a polyglot, said to have been able to speak 11 languages.

His scholarly career took off after that. In 1962, Fr. Martini accepted the Chair of Textual Criticism at the Pontifical Biblical Institute and became that institute’s rector in 1969. In 1978, he was appointed as chancellor of the Gregorian, of which the Biblical Institute was a part. Almost 18 months later, he was given his first pastoral assignment, and not the smallest: he was appointed as archbishop of Milan.

Blessed Pope John Paul II consecrated Archbishop Martini himself and created him a cardinal in the consistory of February 1983. Cardinal Martini, then almost 56, became cardinal priest of San Cecilia.

As archbishop of Europe’s largest diocese, Cardinal Martini also served in other functions. He was relator of the 6th General Assembly of the Synod of Bishops, which focussed on ‘Penance and Reconciliation in the Mission of the Church’. He was also president of the Council of European Bishops’ Conferences from 1986 to 1993. The scholar-cardinal became a member of the Pontifical Academy of Sciences in 2000.

In 2002, Cardinal Martini resigned as archbishop of Milan, having reached the mandatory retirement age of 75. He returned to his life as biblical scholar, moving to Jerusalem to work at the Pontifical Biblical Institute once more. Cardinal Martini was able to participate in the conclave of 2005, and is rumoured to have been a possible future pope.

Cardinal Martini had a reputation of being quite liberal on many topics, which no doubt made enemies in some quarters, but questioning things is what he had learned in his many years as a scholar. On topics such as contraception, euthanasia, and the ordination of women (at least as deacons), Cardinal Martini diverged from the general stance of the Church, but he was never sanctioned or warned in any way. His focus on education, social justice and the collegiality of bishops can only be lauded.

Carlo Maria Cardinal Martini passed away in Gallarate, northwest of Milan, after Parkinson’s disease left him unable to eat and drink normally. He received fluids intravenously, but refused further treatment. He is said to have wanted to be buried in Jerusalem, where he purchased a grave site.

The College of Cardinals now numbers 206, of whom 118 are electors.