The four ‘dubia’ cardinals – Walter Brandmüller, Raymond Burke, Carlo Caffarra and Joachim Meisner – after not receiving any official response from either Pope Francis or Cardinal Gerhard Müller on the questions they submitted to the Holy Father regarding the interpretation of specific doctrinal points in Amoris laetitia, have requested an audience with the Pope. They did so in April but, just like their original dubia, have received no response to their request. Mirroring previous actions, they have now made their audience request public. Sandro Magister has the full text, which I share below. 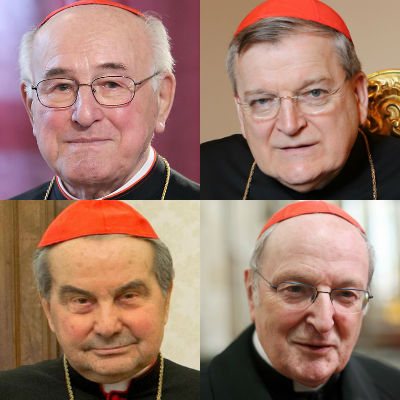 The letter was written by Cardinal Caffarra on behalf of himself and the other three cardinals.

It is with a certain trepidation that I address myself to Your Holiness, during these days of the Easter season. I do so on behalf of the Most Eminent Cardinals: Walter Brandmüller, Raymond L. Burke, Joachim Meisner, and myself.

We wish to begin by renewing our absolute dedication and our unconditional love for the Chair of Peter and for Your august person, in whom we recognize the Successor of Peter and the Vicar of Jesus: the “sweet Christ on earth,” as Saint Catherine of Siena was fond of saying. We do not share in the slightest the position of those who consider the See of Peter vacant, nor of those who want to attribute to others the indivisible responsibility of the Petrine “munus.” We are moved solely by the awareness of the grave responsibility arising from the “munus” of cardinals: to be advisers of the Successor of Peter in his sovereign ministry. And from the Sacrament of the Episcopate, which “has placed us as bishops to pasture the Church, which He has acquired with his blood” (Acts 20:28).

On September 19, 2016 we delivered to Your Holiness and to the Congregation for the Doctrine of the Faith five “dubia,” asking You to resolve uncertainties and to bring clarity on some points of the post-synodal Apostolic Exhortation, “Amoris Laetitia.”

Not having received any response from Your Holiness, we have reached the decision to ask You, respectfully and humbly, for an Audience, together if Your Holiness would like. We attach, as is the practice, an Audience Sheet in which we present the two points we wish to discuss with you.

A year has now gone by since the publication of “Amoris Laetitia.” During this time, interpretations of some objectively ambiguous passages of the post-synodal Exhortation have publicly been given that are not divergent from but contrary to the permanent Magisterium of the Church. Despite the fact that the Prefect of the Doctrine of the Faith has repeatedly declared that the doctrine of the Church has not changed, numerous statements have appeared from individual Bishops, Cardinals, and even Episcopal Conferences, approving what the Magisterium of the Church has never approved. Not only access to the Holy Eucharist for those who objectively and publicly live in a situation of grave sin, and intend to remain in it, but also a conception of moral conscience contrary to the Tradition of the Church. And so it is happening – how painful it is to see this! – that what is sin in Poland is good in Germany, that what is prohibited in the archdiocese of Philadelphia is permitted in Malta. And so on. One is reminded of the bitter observation of B. Pascal: “Justice on this side of the Pyrenees, injustice on the other; justice on the left bank of the river, injustice on the right bank.”

Numerous competent lay faithful, who are deeply in love with the Church and staunchly loyal to the Apostolic See, have turned to their Pastors and to Your Holiness in order to be confirmed in the Holy Doctrine concerning the three sacraments of Marriage, Confession, and the Eucharist. And in these very days, in Rome, six lay faithful, from every Continent, have presented a very well-attended study seminar with the meaningful title: “Bringing clarity.”

Faced with this grave situation, in which many Christian communities are being divided, we feel the weight of our responsibility, and our conscience impels us to ask humbly and respectfully for an Audience.

May Your Holiness remember us in Your prayers, as we pledge to remember You in ours. And we ask for the gift of Your Apostolic Blessing.

1. Request for clarification of the five points indicated by the “dubia;” reasons for this request.

2. Situation of confusion and disorientation, especially among pastors of souls, in primis parish priests.

The cardinals, like before, go out of their way to express their respect for and unity with the Pope, even noting that they are in no way sedevacantist or intent on assuming some part of the Petrine ministry. Of course, too often we see anyone daring to disagree with Pope Francis being accused of undermining what the Pope wants to do, and even of being his enemies. This sort of blind and simplistic behaviour prevents honest discussion and sharing of thoughts, which, it must be repeated, was exactly what Pope Francis asked for in the runup to the two Synod of Bishops assemblies which produced Amoris laetitia.

Cardinal Caffarra and his three brother cardinals are no enemies of the Pope, nor are they rebels. They do, however, take seriously their duty as cardinals: “to be advisers of the Successor of Peter in his sovereign ministry.” And for advisers to do their work, they must first be heard…

There are many who claim that Amoris laetitia has not led to confusion, and was not intended to do so. The latter part may well be true, as has been emphasised several times by the Prefect of the Congregation of the Doctrine of the Faith, Cardinal Müller: the Exhortation must be read within the broader tradition of the Catholic Church. It is clear however, that confusion exists in or is being caused by the interpretations of Amoris laetitia. Another cardinal who acknowledged this, in December of 2016, was Cardinal Willem Eijk.

The letter also states that conflicting interpretations exist. The bishops of Poland and the Archdiocese of Philadelphia promote interpretations that are closer to the traditional teachings than the bishops of Germany and Malta do, just to stick with the examples mentioned. They can’t all be correct, simply because they diverge too much, and sometimes even contradict established doctrine.

A papal declaration of clarity, which, in response to the dubia, would be either a confirmation of existing doctrine or a denial or refutation thereof (and would do nothing to undermine Pope Francis’ focus on mercy, charity and pastoral care in difficult situations), would at least indicate whether individual interpretations from bishops and bishops’ conferences are in line with the intent of Amoris laetitia. Would all confusion be removed immediately? Probably not. People, Catholics included, can be a stubborn lot and individual agendas hard to let go of.

And, as an added bonus, perhaps the entirety of Amoris laetitia would then deserve its due attention, and not just those parts of it which discuss the headline topics of divorce and Communion, which have led to different interpretations.