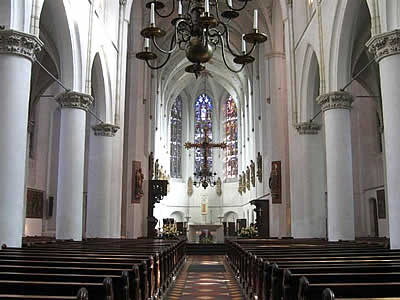 It appears that the process of secularising and selling the cathedral of the Archdiocese of Utrecht is no more option anymore, but soon to be reality. As reported by Hendro Munsterman in his regular newsletter, the parish council is in the second of an eight-step program that will result in the secularisation and then sale of the sole remaining medieval Catholic church in the city of Utrecht. This second step included informing the parishioners, which happened last weekend. Next up is a series of hearings for those parishioners which should then result in a proposal that will be sent to the archbishop. This proposal is a request for secularisation and the process in which that should place. The decision to secularise lies with the archbishop, even though it was initiated by the parish council.

Although a future use for the cathedral has not been confirmed by anyone, a rumour goes that there is already a contract ready for signing, under which the cathedral will be sold to the adjacent museum Catharijneconvent, which already owns the remainder of the old monastic complex of which the cathedral is a part, for a symbolic sum of 1 euro. A sale to the museum will assure the survival of the building’s interior and history.

In the meantime, parishioners and supporters across the archdiocese have signed a petition to prevent the secularisation and sale of the cathedral. Among the 1438 signatories are a number of priests. One, who wished to remain anonymous, said: “We have all been ordained in this church: we now feel what we inflict upon regular parishioners when we close the church in which they were married and where their children have been baptised.”

Whatever the decision, it is already triggering strong emotions, but the fact remains that the parish is taking these steps in order to stay financially afloat. Buildings, especially old ones, cost money, and if donations and other forms of support don’t cover the bill, such extreme measures become options.

While the cathedral of St. Catherine is not the first or only church considered for secularisation, it is unique in that it is a cathedral. Dioceses need cathedrals, so if St. Catherine’s is sold, the Archdiocese of Utrecht must find a new one. The most logical option would be the other church used by the cathedral parish: St Augustine’s, which is smaller and has been closed for renovation for the better part of two years. While possible, it would be almost inconceivable to move the cathedral outside the city of Utrecht, to a more central location in the archdiocese (the Archdiocese of Utrecht stretches from the Randstad metropolitan area to the German border, with the city of Utrecht situated almost on its western edge).

St. Catherine’s has been the cathedral of the Archdiocese of Utrecht since its reestablishment in 1853. The secularisation of cathedrals is rare, but not unheard of. In the 1970s it happened in the Diocese of Groningen-Leeuwarden, where the cathedral of St. Martin was secularised and subsequently demolished, and in 2001 the Diocese of Breda made the church of St. Anthony its cathedral (it had already been the cathedral for several decades in the 19th century). The previous cathedral, St. Michael, was demolished in 2007 and replaced with a new and smaller building.