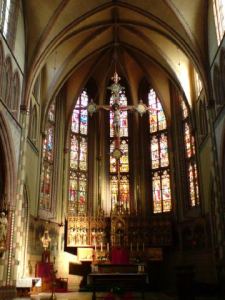 I received a letter yesterday, an invitation for the celebrations around the 125th anniversary, on 25 May, of the consecration of my parish church, the cathedral of Saints Joseph and Martin in Groningen . All ‘new Catholics’, people baptised or confirmed in the past ten years, received a similar invitation.

The parish website has the full schedule of events:

I’m especially looking forward to Fr. Bodar’s talk, the photo exhibit, the new altar, the High Mass on Sunday and the book.

A church, especially the church where one was baptised and confirmed and received the other sacraments, is not just a building. It is a home of sorts. The home of Christ, certainly, but therefore also a home for us. With the other parishioners and the clergy attached to the church we form a family.  The cathedral in Groningen has been a home for me for more than five years now, which is nothing compared to the 125 years that it has been a home for others, but its celebration is also that of me and the parish I am a part of.

A look at the proposed new parishes in the Diocese of Groningen-Leeuwarden after the mergers and reorganisations, as presented today by Bishop Gerard de Korte. It’s a bold plan, which aims to cut back the number of parishes from 81 to a mere 19. The reasons are multiple, including both financial and pastoral concerns. The reorganisation is set to be completed by 1 January 2018.

As a resident of this diocese, the plan also affects me and those in the parish where I live and attend Masses (which are, incidentally, not the same). I am therefore quite glad that the parish of St. Martin in Groningen (number 10 on the map), which includes the cathedral, remains unchanged. In a cartographical oddity, though, the southern suburbs of the city remain split off as they are today, but will be merged with the parishes in Haren and Zuidhorn – all parishes which today lack priests.

Other interesting plans include the merger of the parishes of Dokkum and Bergum with the island parishes of Ameland and Schiermonnikoog (3 on the map); the large  and, as far as Catholics are concerned, empty quarters of Drenthe (14 and 16); and the parish along the German border (19), traditionally Catholic because of the Catholic peat workers moving there in the 19th century.

The new parishes, which the bishop says will be “learning, diaconal communities working out of the Eucharist”, may often be big, it will once more allow each parish to actual have its own resident priest. Hopefully this’ll mean the start of a turnaround away from the too-ubiquitous “Word & Communion services” that take place every Sunday throughout the diocese.

Last Wednesday I joined the annual pilgrimage of our parish to the Marian shrine at Kevelaer. I’d never been there but I had heard good stories, so once the opportunity presented itself, I went. There was a full busload, almost 60 people, who went to the popular German town, where Dutch merchant Hendrik Busman built a small chapel in 1641. A prayer card of Our Lady of Luxembourg was later bought by his wife and is now the centre of the devotion at Kevelaer. Both the construction of the chapel and the purchase of the card were instigated by the couple hearing the voice of the Blessed Virgin.

Nowadays, the town is centered around the old chapel with the prayer card, two churches, one of them a basilica, a sacrament chapel and a rectory. Many thousands of pilgrims visit Mary at Kevelaer every year.

Our one-day pilgrimage was started with a Mass offered in concelebration by Bishop de Korte and Father Wagenaar. I was initially supposed to have served, but there were no cassocks in my size, sadly. German men are generally a bit shorter than me, it seems. Instead, I took care of the collection. There was time to look around in the various churches as well as the many shops selling devotionals, before we had a warm lunch at the rectory. In the afternoon we prayed the Stations of the Cross in the park devoted to that exact purpose.

I left Kevelaer with a very positive impression. The atmosphere is very warm in a generally spiritual way and once you immerse yourself in it really feels blessed. I also bought two small medals of St. Joseph, my baptismal saint, who has been a great help recently, even without my initial knowing. I now wear one around my neck, on a silver chain that Brother Hugo was kind enough to give me. The other is worn by my girlfriend, who is responsible for asking St. Joseph for some assistance in the first place.

I’ll be at the lecture advertised above tonight. For those who don’t read Dutch, the topic will be French author Marcel Pagnol and his ideas of faith and happiness (a very Catholic idea, of course). French literature is hardly my forte, and I can’t say I have ever heard of Pagnol, but I have at least heard the speaker speak before. Dr. W. Bots knows a thing or two about French Catholic authors and has been a guest speaker in the parish a few times. he knows an awful lot about his topics, so I have hopes that I’ll be able to learn a thing or two.

The lecture is not organised by the student parish, but we have been asked to advertise it on behalf of the St. Martin’s parish. We do, after all, share a cathedral, parish house and priest.

Credit to Taquoriaan for the design of the flyer.