The old debate about the number of seminaries in the Netherlands was restarted this week as the rectors of two of them – Fathers Jan Vries of Rolduc (Diocese of Roermond) and Gerard Bruggink (pictured at right) of the Tiltenberg (D. of Haarlem-Amsterdam) – both suggested that the Church in this country would be better served by having a single seminary for the entire Province, instead of the six that exist now.

Every Dutch diocese, except for Groningen-Leeuwarden, maintains its own seminary, although there is cooperation to a certain extent: professors and teachers often work at more than one seminary, and the one in the Diocese of Breda, Bovendonk, is specifically geared towards seminarians who begin their studies and formation later in life, next to a job. Groningen-Leeuwarden and Rotterdam send their seminarians, for their entire study or part of it, to Haarlem-Amsterdan, Utrecht or Bovendonk. In addition to this, the Neocatechumenal Way maintains two seminaries in the Netherlands and sends its students for several courses to either Rolduc or the Tiltenberg.

All in all, there are 76 fulltime seminarians studying at the several seminaries in the Netherlands, of whom 49 come from abroad. They are generally part of the Neocatechumenal Way. There are also another 11 parttime seminarians, who study next to their day job. 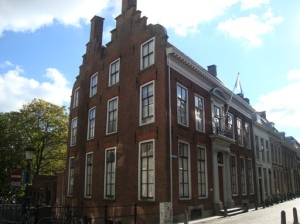 Most seminary rectors are in favour of merging the existing seminaries into one or two. Father Patrick Kuipers of the recently re-established Ariëns Institute (seminary building pictured at left), Archdiocese of Utrecht, says, “Personally, I am very much in favour of it. I think that the group of seminarians in the Netherlands is too small to be spread out over five or six institutes.” He thinks a group of 25 would be ideal, because that would form a true community. Father Norbert Schnell, of Bovendonk, relates that German colleagues say that 20 seminarians is the minimum required.

Fr. Bruggink wonders if it is even possible to maintain two seminarians, one according to the proper seminary model in which all education taking place in-house, and another following the convict model, in which some or all academic training takes place at a university of polytechnic. “I am very much in favour of maintaining the seminary format, if need be next to the convict form. Intellectual, pastoral and personal formation together with spiritual formation in one house, in one whole, is, I think, necessary for the future. I think that young people are attracted to that instead of the current fragmentation.”

There are practical considerations which all boil down to one thing: can the Dutch Church continue to support these five or six separate institutes into the future? The financial side of this is not the least, as the Church is not supported in any way but by the faithful. It is they who, ultimately need to support whatever structure of seminary education the bishops wish to maintain.

And, as all seminary rectors stress, it is with the bishops that the ball lies. Fr. Kuipers says, “I discussed it several times with Cardinal Eijk, who is responsible in the bishops’ conference for the seminaries. But that is all. The question is to what extent the bishops can let go of their own seminaries.” Fr. Vries of Rolduc simlarly states, “We can toss ideas about, but it’s the bishops who must hold the talks.”

Odd one out among the rectors is Fr. Filip De Rycke of the St. John’s Centre in Den Bosch. He admits that “sharing” teachers is a burden on people and that a larger group of students is better. But he also looks to Flanders, where all dioceses, apart from Bruges, joined forces. There is no outpouring of vocations there either, he states.

Deciding in favour of only one or two seminaries for the Church in the Netherlands would, in my opinion, have positive effects in several areas. It would allow for the formation of true communities which in turn would attract more prospective seminarians, and resources may be bundled: financially and in manpower (thus eliminating the concern that Fr. De Rycke mentions). Expertise is more effective when concentrated and communities form their members when they can actually be communities.

I hope that this question is picked up by the bishops, and that they are able to look at the bigger picture of the future of the Church in the Netherlands. We need priests and priests need the best formation and education on offer.