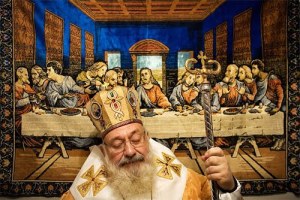 In the last such event before the sede vacante begins, Ukrainian Lubomyr Cardinal Husar marks his 80th birthday today, and as such can not take part in the conclave.

Born in Lviv, which at the time was a Polish city, in 1933, young Lubomyr’s childhood was marked by the violence of World War II. In 1944, this caused his parents to flee to the west. After some years in Salzburg in Austria, the family emigrated to the United States in 1949. A year later, Lubomyr started studying at the Ukrainian Catholic St. Basil College Seminary in Stamford, Connecticut. After time at the Catholic University of America and Fordham University, he was ordained to the priesthood in 1958. Fr. Husar was a priest for the Ukrainian Catholic Eparchy of Stamford, which covers parts of New York and New England.

From his ordination until 1969, Fr. Husar taught at the seminary where he himself was educated, and he was a parish priest from 1966 to 1969. In that latter year, he went to Rome to study theology at the Pontifical Urbaniana University. Now a doctor of theology, he entered the Studity monastery at Grottaferrata in Italy in 1972, and two years later, he became the superior there.

Fr. Husar’s consecration to bishop in 1977, to go with his new task as Archimandrite of all the Studite monks in Europe and America, from 1978 onwards, caused a bit if a stir, since the Pope had not given his apostolic mandate, something that Roman Canon Law required, but the Law of the Eastern Churches did not.

In 1995, as his homeland reopened its borders to the rest of the world, Bishop Husar was elected as Exarch of Kiev and Vysshorod. Upon his return to the Ukraine, he relinquished his American citizenship. In 1996, he was appointed as auxiliary bishop of Lviv, and in 2001, as that see had fallen vacant, Eparch Husar was elected as Major Archbishop of Lviv. In that same year, he was created a cardinal, with Santa Sofia a Via Boccea as his title church. With Ignace Daoud, Cardinal Husar was the only Eastern Catholic to participate in the 2005 conclave that elected Pope Benedict XVI.

In 2005, the see of Lviv was moved to Kiev, and Cardinal Husar became Major Archbishop of that city. In 2011, failing eyesight caused him to retire, although he had performed the Ukrainian Catholic liturgy from memory when his sight had gotten too bad.

As Major Archbishop of Kiev, Cardinal Husar received an honorary doctorate from the Catholic University of America, and he was decorated by the President of Ukraine “for his outstanding personal contribution in spiritual revival of the Ukrainian nation, longstanding church work, and to mark his 75th birthday”.

There are now 117 cardinal electors who are allowed to participate in next month’s conclave.