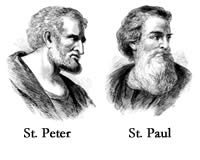 Which is also, of course, the Solemnity of Saints Peter and Paul, the rock and the apostle to the gentiles, in many ways the foundations of the Church. And also, it is the day upon which Pope Benedict XVI celebrates 60 years of priesthood.

As every year, the metropolitan archbishops, standing firmly in the line of the aforementioned saints and in union with the Holy Father, today receive their pallia. In the words of the pope, from today’s homily:

“What does this mean? It may remind us in the first instance of Christ’s easy yoke that is laid upon us (cf. Mt 11:29f.). Christ’s yoke is identical with his friendship. It is a yoke of friendship and therefore “a sweet yoke”, but as such it is also a demanding yoke, one that forms us. It is the yoke of his will, which is a will of truth and love. For us, then, it is first and foremost the yoke of leading others to friendship with Christ and being available to others, caring for them as shepherds. This brings us to a further meaning of the pallium: it is woven from the wool of lambs blessed on the feast of Saint Agnes. Thus it reminds us of the Shepherd who himself became a lamb, out of love for us. It reminds us of Christ, who set out through the mountains and the deserts, in which his lamb, humanity, had strayed. It reminds us of him who took the lamb – humanity – me – upon his shoulders, in order to carry me home. It thus reminds us that we too, as shepherds in his service, are to carry others with us, taking them as it were upon our shoulders and bringing them to Christ. It reminds us that we are called to be shepherds of his flock, which always remains his and does not become ours. Finally the pallium also means quite concretely the communion of the shepherds of the Church with Peter and with his successors – it means that we must be shepherds for unity and in unity, and that it is only in the unity represented by Peter that we truly lead people to Christ.”

The harvest is quite large today, with 49 new metropolitan bishops appointed since last year’s ceremony. A significant number comes from traditionally Catholic countires and areas, such as South-Anmerica, the Philippines, but also various sub-Saharan countries, North-America, and a few nations in Europe and Asia.

Below follows the list of new metropolitan archbishops. The vast majority of these men were specifically apointed to archbishops, but a number became so because their dioceses were elevated to archdioceses. Recently, this happened with two dioceses in Angola – Malanje and Saurimo – and three in Brazil – Passo Funda, Pelotas and Santa Maria.

Five of these men, namely archbishops Barwa, N’Koue, Poulard, Pujasumarta and Zeigler, were unable to be in Rome for the ceremony. They will receive their pallia at a later date.

One thought on “Pallium Day”