Msgr. Klaus Metzl called it the most beautiful day of the year so far, and well he might. The Diocese of Passau, located where Germany meets Austria and the Czech Republic, had been without a bishop for 18 months, so the appointment of a new shepherd on Friday was indeed what both he and the faithful had “waited, hoped and prayed for”.

In october of 2012, Bishop Wilhelm Schraml retired after almost eleven years at the helm of the almost 1300-year-old diocese, but stayed on for one more year as Apostolic Administrator, after which Msgr. Metzl took over. 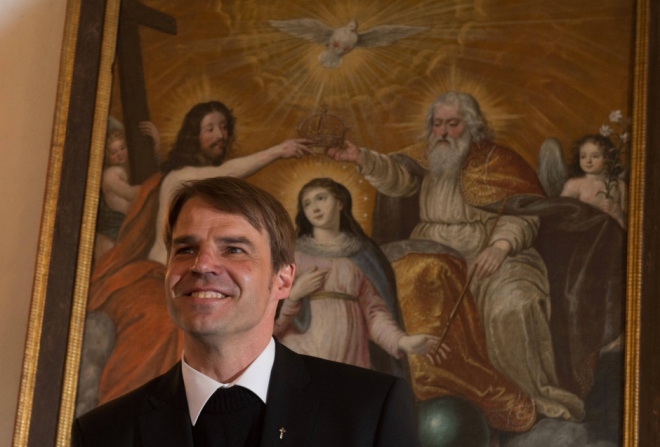 And now the choice has fallen on Bishop-elect Stefan Oster to be the 85th bishop of Passau. The new bishop is a member of the Salesians of Don Bosco (an order which boasts an additional 124 bishops and cardinals among its members) and will be the youngest ordinary of Germany upon his consecration on 24 May. There are five German bishops younger than him, but they are all auxiliaries.

The appointment of Bishop-elect Oster has been welcomed almost everywhere, which seems to be generally due to his unassuming yet communicative personality. A former journalist, the 48-year-old future bishop never held positions of power, either within or outside the Salesians. The fact that he was chosen must therefore be due to his person qualities, or, as the case may be, those which he exhibited in his life before joining the Salesians, when he was a journalist, student of philosophy, history and religion in Germany and the UK, and ultimately theology before ordained in 2001.  After an award-winning dissertation at the University of Augsburg, he joined the future bishop of Regensburg, Rudolf Voderholzer, in Trier. In recent years he has been mainly active as a teacher. And he also juggles.

A trained dogmatist, Bishop-elect Oster has the ingredients for a long and fruitful occupation of the see that was first established by Saint Boniface: communication, an unassuming and fraternal personality and theological acumen.

The number of vacant dioceses in Germany is now back to five – Erfurt, Freiburg im Breisgau, Cologne, Limburg and Hamburg.