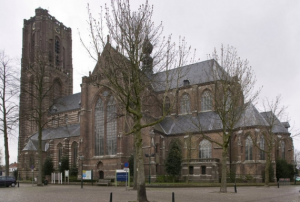 No April Fool’s joke, the announcement made by Father Leendert Spijkers on Easter Sunday: granted by Pope Benedict XVI back in February, the 15th century church of St. Peter in Oirschot, Diocese of ‘s Hertogenbosch is to be elevated to the status of basilica minor. Bishop Antoon Hurkmans will make the official declaration some time in the summer, making it his diocese’s fourth basilica.

The church of St. Peter in Oirschot dates from 1515, replacing its predecessor which had burned down in 1462. From 1648 to 1799 the church was Protestant, and it wasn’t until 1904 that the local parish regained full ownership of church and tower. In the war, the tower was severely damaged from Allied gunfire, and it took until 1952 for restorations to be completed. The church is one of the largest remaining Gothic village churches in the province of North Brabant. The furnishings are partly original and partly taken from demolished churches with the altars dating from around 1700 and 1766 respectively. The church has been a national monument since 1966.

Age and a certain esthetic value are but two elements which can make a church a basilica. Another, and certainly not the least important, is the presence of a certain devotion within an active parish community. In the case of St. Peter’s, that devotion is to the ‘Holy Oak’. 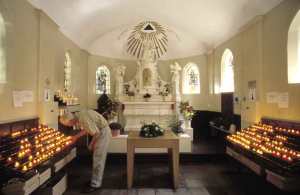 The story goes that, some time in the early 15th century, two shepherds found a statue of the Blessed Virgin on the banks of the Beerze stream. They placed it an oak, but inhabitants of nearby Middelbeers took the statue and put it in their church. The next morning, though, the statue was back in the oak. Villagers of Oirschot came to venerate the statue, and there were reports of miraculous healings.

A chapel was built on the place of the oak, and an annual procession developed to that spot. Oak and chapel were removed in 1649, but a new chapel (view of the interior pictured) was erected in 1854, on the foundations of the old one. The original statue resides in St. Peter’s, but a replica remains at the chapel. Some 250,000 pilgrims and visitors find their way to Mary of the Holy Oak every year.