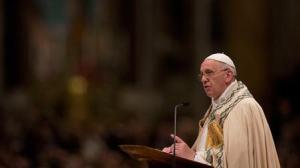 In an example of how very general words can lead to the oddest of conclusions, local and international media have taken some of Pope Francis’ comments in a three-hour dialogue with religious superiors (held in November, but published only recently) and used them to suggest that the Pope, and in extension the Church, had changed its teaching on ‘alternative forms of family life’. In other words, they claimed that Pope Francis, or rather the image that many have of how they want him to be, is now in favour of same-sex couples raising children, one-parent families and other unions in which children are raised other than complete families with a father and mother.

Jimmy Akin has a good summary and explanation of what the Pope really said.

What can we conclude from this? That, quite simply, people are not hearing what the Pope is saying. The main reason for this is that his words are not being communicated properly, even wilfully changed or erroneously interpreted, by independent media. And related to that, we can say that people are not aware of what the Church is teaching.

I have read some comments which seemed to indicate that the mere recognition of these alternative forms of family is a new thing, and thus a change in attitude. The Church, many think, considers homosexuality to be disordered and is opposed to same-sex relations because she refuses to acknowledge its existence. In that light, Pope Francis words about suitable pastoral care for children in such situations and about the importance of education can appear to be revolutionary.

But they are pertinently not. They are valuable and they must be heard and taken to heart, but they are not new. The need to provide adequate pastoral care and education to anyone, regardless of their state of life or sexual orientation, is not the same as approving of that state of orientation. The Church is not an ostrich, pretending that all the things she doesn’t like aren’t there. No, she openly acknowledges they exist. And in doing so, she can teach: that desires do no dictate what is good for us, that not everything that can be done should be done and that people are called to an ultimate destination in God. That destination is not reached or even known by allowing everything. The journey does not originate in people, but in God. We are therefore called to strive for what is God’s and make what is man’s suited to the Lord. That is process in which we are first and foremost called to see the world so that we can reach out to it.