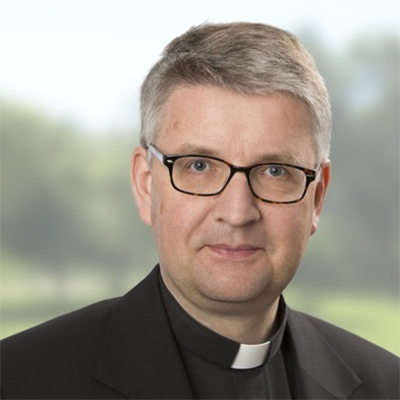 Almost a year after the retirement of Cardinal Karl Lehmann, all the dioceses of Germany have a bishop at the helm again – a situation that has not existed for several years. Succeeding the cardinal who led the Diocese of Mainz for 33 years is Father Peter Kohlgraf.

A priest of the Archdiocese of Cologne, Bishop-elect Kohlgraf has already been active in Mainz since 2012. He has been working as professor of pastoral theology at the Katholischen Hochschule in that city, and assistant priest in Wörrstadt, south of Mainz. Fr. Kohlgraf is a graduate of the Universities of Bonn and Münster, and has experience in pastoral care in the parish and for students as well as education.

The date for the bishop’s consecration is yet be announced, as is the identity of the consecrating bishops, but it would be surprising indeed of Cardinal Lehmann would decline the honour.

With the appointment of Fr. Kohlgraf, Cologne once again shows itself to be one of the ‘bishop factories’ of Germany. Six of the 27 ordinaries in Germany hail from the archdiocese on the Rhine. Other such bishop factories are Paderborn with five ordinaries originating from there and Trier with four. All three dioceses are among the oldest in Germany and located in the central part of western Germany, to the west and north of Mainz.

In an interview for Katholisch.de, the new bishop of Mainz touched on some of the more sensitive topics in an dbeyond the church in Germany. Asked about the trend of merging parishes to create what the interviewer calls XXL parishes, as an answer to the shortage of priests, and if he has any alternatives, Fr. Kohlgraf responds:

“I think there is no standard solution here, either. In the Catholic Church we are faced with the tension that we rightly say that the celebration of the Eucharist is source and summit of the life of the Church. That means that, on Sundays, the Eucharist is the central celebration from which the Church and the community draw life. The question is then, of course, how Catholic life should function in small communities. I myself live in a small village in Rhenish Hesse, in a Catholic diaspora situation. That is this tension in which we exist. We should not merely think centralistic, but must also consider how Church life can function in each location. People must be motivated to live out their being Christian.”

Bishop-elect Kohlgraf’s thoughts here are comparable to those of, to name one, Bishop Gerard de Korte in the Netherlands.

As an academic, the bishop elect has followed the discourse about the priest shortage and possible solutions and especially the idea to ordain married men, the so-called viri probati. On this, he says:

“It should be proven if this really solves our problems. I am not so certain about that. I don’t want to look at this from ideological, philosophical or theological perspectives. But it is not without reason that the priestly vocation has always been an academic calling with a full study program. That has meaning. I think that we must remain able to speak theologically in modern society. That quality will play an increasingly greater part. That does not mean that there are not also highly qualified men among the so-called viri probati. But we must look at how a part-time formation would work in addition to holding a job. There are many questions which are not yet answered. I do not currently see a solution for it.”

It sounds as if Bishop-elect Kohlgraf is not opposed to detaching the priesthood from a mandatory vow of celibacy, but his uncertainty has to do with the practicality of it all, especially the years of study and formation. There are, however, places where part-time formation is practiced, albeit for the permanent diaconate, for example in Bovendonk, in the Dutch Diocese of Breda. Here, men study part-time next to their fulltime job, with the exception of the final years, in which they work fulltime in a parish.