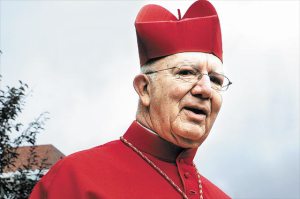 In Colombia another cardinal of the Catholic Church reaches the age of 80, thus losing his vote in a future conclave. He is Pedro Cardinal Rubiano Sáenz, and his birthday today means that there are 117 cardinal electors left.

Pedro Rubiano Sáenz was born in Cartago, western Colombia. Studying in Popayán, Colombia and in Québec, Canada, he was subsequently ordained for the Diocese of Cali. As a priest, Fr. Rubiano Sáenz founded several parishes, functioned as chaplain to the Air Force Academy, a clinic and a college. He later was assigned as treasurer of the diocese, which by then had been elevated to an archdiocese, and vicar for pastoral activity. He also worked as vice-rector of a school. In 1971, he was appointed as bishop of the Diocese of Cúcuta, located in the north of Colombia.

Aged not yet 40, Bishop Rubiano Sáenz was among the youngest of the nation’s bishops. After almost 12 years in Cúcuta, he was appointed as Coadjutor Archbishop of his native Archdiocese of Cali, succeeding Archbishop Alberto Uribe Urdaneta in 1985. In 1986, he hosted Blessed Pope John Paul II as he visited Colombia. Archbishop Rubiano Sáenz headed the Colombian Bishops’ Conference from 1990 to 1994. In the middle of that tenure, he was transferred to the nation’s capital and became Archbishop of Bogotá.

As Primate of Colombia, Archbishop Rubiano Sáenz would soon be made a cardinal. This happened in 2001, and he became the first cardinal priest of Trasfigurazione di Nostro Signore Gesù Cristo. From 2002 to 2005, he once again chaired the Bishops’ Conference. In 2010, Cardinal Rubiano Sáenz retired as Archbishop of Bogotá.

Cardinal Rubiano Sáenz was a member of the Congregation for Catholic Education and the Pontifical Council for the Pastoral Care of Migrants and Itinerant Peoples.