Pope Benedict this morning ended his Lenten retreat. In a short address, he thanked Cardinal Ravasi for leading the retreat, as well as the other participants for being a “community of prayerful listening”. Below an excerpt of the address:

“The art of believing, the art of praying” was the theme. I was reminded of the fact that the medieval theologians translated the word “Logos” not only as “Verbum”, but also as “ars”: “Verbum” and “ars” are interchangeable. For the medieval theologians, it was only with the two words together that the whole meaning of the word “Logos” appeared. The “Logos” is not just a mathematical reason: the “Logos” has a heart, the “Logos” is also love. The truth is beautiful and the true and beautiful go together: beauty is the seal of truth.

And yet, starting from the Psalms and from our everyday experience, you have also strongly emphasized that the “very good” of the sixth day – expressed by the Creator – is permanently contradicted by the evil of this world, by suffering, by corruption. It’s almost as if wickedness wills permanently to spoil creation, to contradict God and make its truth and its beauty unrecognizable. In a world so marked even by evil, the “Logos,” the eternal beauty and the eternal “art”, must appear as a “caput cruentatum.” The incarnate Son, the incarnate “Logos” is crowned with a crown of thorns and nevertheless is just that: in this suffering figure of the Son of God we begin to see the deepest beauty of our Creator and Redeemer; in the silence of the “dark night” we can, nevertheless, hear the Word. And believing is nothing other than, in the darkness of the world, touching the hand of God, and in this way, in silence, hearing the Word, seeing love. 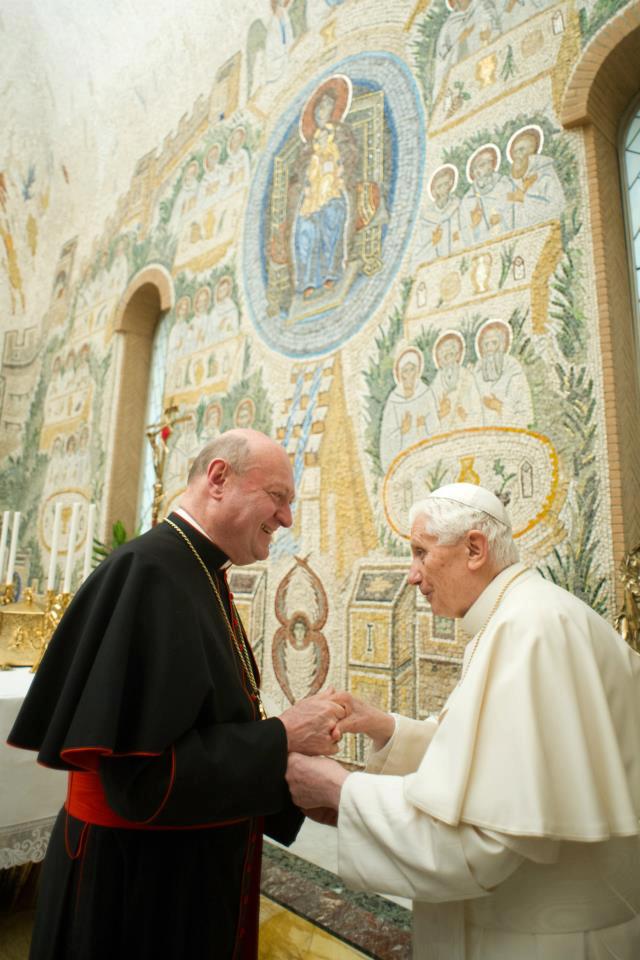 The Holy Father also thanked Cardinal Ravasi personally, in a letter. Among other things, he wrote that the theme chosen by the President of the Pontifical Council for Culture was particularly helpful in this time of silence and prayer: “We have been able to tap into the source of plenty and pure water that is God’s Word … from the Book of Psalms, the place par excellence where the Word of the Bible becomes prayer.” In closing, Pope Benedict XVI told Cardinal Ravasi that “the Lord will know to reward you for this effort”, a wish that gains special significance in the light of the coming conclave, in which Cardinal Ravasi will vote. Many outside the conclave consider him papabile, a likely successor of Pope Benedict XVI on the Chair of St. Peter.

But luckily that choice ultimately lies in the hands of 116 electors and most importantly, the Holy Spirit. Let’s pray for a fruitful final six days of this papacy, blessing and guidance or the cardinals in the conclave, and also for the new Pope, whoever he may be.

A cardinal for only one year and five days, Julien Ries did not receive his red hat as the result of a succesful career in the hierarchy. The Belgian prelate rather received it for his work in the quiet of his study and the lecture hall. This morning he passed away at the age of 92.

Julien Ries was born near Arlon and ordained a priest for the Diocese of Namur in 1945. After a few years working as a parish priest and history teacher, Father Ries taught history of religion at the Catholic University of Louvain. After that university was split in a Flemish and a Walloon section in 1968, he remained at the latter. He remained there until his retirement in 1990.

A highly  productive author, Fr. Ries was created a cardinal in the consistory of February 2012. Consecrated a bishop a week before the consistory, he held the titular see of  Belcastro, and later became Cardinal-Deacon of Sant’Antonio di Padova a Circonvallazione Appia.

With more than 600 publications to his name, Cardinal Ries was convinced that those were the reason for being made a cardinal. Pope Benedict XVI studied his work closely, and in 2012, Cardinal Ries said in an interview: “He phoned me more than once to congratulate me, when he had read a book of mine.”

Cardinal Ries’s work was best know for its focus on religious anthropology and humanities. In 2009, he donated his library and all his notes and correspondence to the Catholic University of Milan.

Cardinal Ries was never an elector. With his passing the total number of cardinals drops to 208.