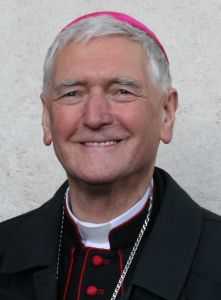 Strong rumours appeared yesterday that Bishop Antoon Hurkmans, retiring from the Diocese of ‘s-Hertogenbosch, will not be returning to his hometown of Someren, as he previously announced. Instead, his retirement will be spent in the eternal city, Rome, where he will become the new rector of the Church of the Frisians.

The church of Saints Michael and Magnus, as it is officially known, is a 12th century church adjacent to Saint Peter’s Square. While just outside the borders of Vatican City, it is an extraterritorial possession of that country. It was restored as the national church of the Dutch in Rome in 1989, largely because of efforts by the late Msgr. Tiny Muskens, later bishop of Breda.

Bishop Hurkmans will succeed Dominican Father Tiemen Brouwer, who has been responsible for the church since 2007.

The presence of Frisian Christians in Rome can be traced back to the ninth century. All inhabitants of the coastal areas (reaching quite far inland at times) of what is now the Netherlands, northern Germany and southwestern Denmark were considered Frisian at that time. The current church was built in 1141, but only 5 years later Pope Eugene III took the perpetual right of the Frisians to use the church away from them. In 1910, the later Cardinal Jan de Jong, who was then studying in Rome, made a pilgrimage to the church and found that all knowledge of the Frisian history of the church seemed forgotten. In 1989, the head of the Dutch College, Msgr. Muskens, succeeded in making the church a Dutch centre in Rome. In 2005 this was made official, and the church became a parish church in its own right.

EDIT: Bishop Hurkmans was put forward as rector of the Church of the Frisians by the Dutch Bishops’ Conference. This suggestion now lies with the Vicariate of Rome to accept or refuse.

The news has not been officially confirmed yet, so treat it as as rumour for now. Chances are that we will get said confirmation on or shortly before 14 May, when Bishop Hurkman’s successor in ‘s-Hertogenbosch, Msgr. Gerard de Korte, is installed.

One thought on “A Roman retirement for Bishop Hurkmans?”