At the time of my writing this there is no official word from Rome yet, but strong rumours started to surface yesterday that Rome has issued a decision in favour of the seven German bishops who had serious doubts about the proposed pastoral guide concerning Communion for non-Catholics, that the German Bishops’ Conference had voted for in February. The Congregation for the Doctrine of the Faith, the rumours say, has studied the matter and the final decision is explicitly endorsed by the Holy Father. The official statement may become public, but it appears that the question was deemed important enough to lead to an unusual swift decision, made all the more significant by papal involvement.

While the letter by Cardinal Woelki, Archbishop Schick and Bishops Zdarsa, Hanke, Ipolt, Voderholzer and Oster received much attention in the media, the signatories themselves treated it as a normal matter of correspondence. Cardinal Woelki, who was visiting Ukraine when the news broke, expressed his surprise at the hype and the talk about dissent. Presenting the questions about intercommunion to Rome was not so much a matter of going against his fellow bishops, but rather came from the importance of the matter: “With several bishops, we were convinced that it would be good to universally coordinate the solution that we have discussed and established here, with an eye on the unity of the Church and the common ground with the other particular churches.” Cardinal Woelki is not so much opposed to the proposals from the conference, to allow non-Catholic spouses of Catholics to receive Communion with their partner on a case-by-case basis, but does not think it is a decision that should be made by the German bishops alone. 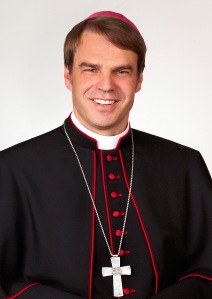 “The Eucharist is so central to us Catholics, that it expresses the basis of our entire understanding of faith and church. Someone who is able to say “Amen” at the end of the Eucharistic Prayer, says yes to the communion with the Pope and the bishops and with the saints that it implies. He says yes to the special priesthood, the prayer to the mother of the Lord and for the dead – to name just those points which distinguish us, for example in the understanding of what a church is, from our Evangelical brothers. In essence our being Church is expressed in its most dense and concrete way in the Eucharist.”

The proposal from the German bishops includes the idea that a non-Catholic with a strong desire to receive the Eucharist, and after confirming the Catholic understanding of it, can do so. They claim that this is one of the exceptions in which a non-Catholic can receive, normally in an emergency and danger of death. But Bishop Oster rightly states that a person with the desire to receive with his or her spouse is not automatically in danger of death and “has time and opportunity to enter into the Church, as he or she already shares the same understanding of Church and Eucharist.” The bishop wants to know if this desire is indeed a serious necessity or even danger which would allow a non-Catholic to receive Communion.

Bishop Oster also no romantic notions of how such a change would be generally received by the faithful:

“Experience with past regulations show us that what are depicted as singular cases here, will be perceived by the general public as a broad permission, in the sense of: “Now the others can finally come to Communion with us.”

The first reactions support this reading, the bishop says, and that may lead to a trivialisation of the Eucharist. “After all, we rightly call the Eucharist “the most holy”, and how we treat it is, in my opinion, very important.”

The bishop of Passau ends his article with a second reminder that, despite what some media claim, there is no schism among the German bishops, and nor will there be.

“I am fully convinced that the bishops who think differently also want what is best for the Church and ecumenism. For us signatories the unity of the bishops’ conference, as well as progress in ecumenism, is also important. But we wonder if the path chosen can be taken in this way – and very much want to receive a deeper explanation.”

EDIT (19-4): The German Bishops’ Conference released a statement today in which it declares that any reports about a decision against the pastoral document from the bishops about intercommunion are false. The Holy Father has, however, issued an invitation to Cardinal Reinhard Marx, president of the conference, to discuss the issue in Rome. Cardinal Marx has gladly welcomed this invitation. Who will take part in this discussion remains to be seen.