“On 11 January 2019, the Congresso of the Congregation for the Doctrine of the Faith, at the conclusion of a penal process, issued a decree finding Theodore Edgar McCarrick, archbishop emeritus of Washington, D.C., guilty of the following delicts while a cleric: solicitation in the Sacrament of Confession, and sins against the Sixth Commandment with minors and with adults, with the aggravating factor of the abuse of power. The Congresso imposed on him the penalty of dismissal from the clerical state. On 13 February 2019, the Ordinary Session (Feria IV) of the Congregation for the Doctrine of the Faith considered the recourse he presented against this decision. Having examined the arguments in the recourse, the Ordinary Session confirmed the decree of the Congresso. This decision was notified to Theodore McCarrick on 15 February 2019. The Holy Father has recognized the definitive nature of this decision made in accord with law, rendering it a res iudicata (i.e., admitting of no further recourse).” 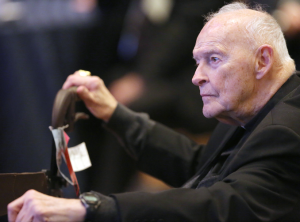 A fairly brief note, the first from the Holy See press office today, but one with serious ramifications. The Church’s progress in the fight against sexual abuse, especially in the last few weeks leading up to the bishops’ meeting about that topic in Rome, has been heavily criticised. While progress definitely exists, many say it’s not going fast  enough or isn’t being done thoroughly enough, and that past mistakes and ill judgements continue being made today. This decision from the Congregation for the Doctrine of the Faith, however, should serve as a reminder and an impulse that no abuser can hide behind the comforts of his or her office.

Mr. McCarrick has been what is usually called ‘laicised’, which is not really the right term, as many have pointed out that it seems to mean that being a lay person is somehow a step below being a cleric. As the above publication states, McCarrick has been ‘dismissed from the clerical state’. He remains a priest, as all sacraments are eternal and cannot be revoked, but he no longer has any rights or duties associated with that state. He can not present himself as a priest or bishop, which includes dressing like one, can’t celebrate any sacraments (apart from Baptism, which anyone can confer in an emergency) and can exercise no rights regarding support from any parish, diocese or religious movement, beyond those extended to any random passer-by.

The statement also indicates exactly what McCarrick has been found guilty of: solicitation in the Sacrament of Confession, ie. improper advances or conduct during a person’s confession; sins against the Sixth Commandment, “You shall not commit adultery”, which relates to proper sexuality regarding one’s own body and the relationships with others; all this made worse by the power McCarrick held as priest, bishop, archbishop and cardinal. In the vast majority of cases, situations of sexual abuse are in the basis abuses of power.

For decades, McCarrick was one of the most powerful men in the Catholic Church in the United States and, once he had been made a cardinal 2001, in the world church. This long protected him from accusations and investigations. Now that a verdict has been reached after a due process, the question remains: who knew about the misdeeds of McCarrick, and who kept quiet when he should have spoken up? The list of those rumoured to have known at least something includes some high-level names, including that of McCarrick’s successor in Washington, Cardinal Wuerl, and that of the new Chamberlain of the Church, Cardinal Farrell…