“The death of Msgr. Bluyssen has affected me deeply. He was the bishop who ordained me a deacon and a priest. At my consecration as bishop he was one of the concelebrants. My appreciation for him is great. For seventeen, he was bishop of ‘s Hertogenbosch with all the beauty, but also with all the difficulties that this office brings with it. His kindness, tranquility and wisdom have helped him in his task. As bishop emeritus he continued to follow and sympathise greatly with the Church, the diocese of Den Bosch. In addition, he loved to study, wrote books and celebrated life with family and friends. Of course, like many others, Msgr. Bluyssen suffered through developments in the Church, but he was able to see them in a larger perspective. I will also miss the paternal presence of Msgr. Bluyssen at diocesan celebrations, which he always tried to attend. I am confident that Msgr. Bluyssen is now with the Lord, together with Mary and the saints. After all, like we do, he believed in a God of the living, and not in a God of the dead.”

Words from Bishop Antoon Hurkmans, second successor of Bishop Johannes Willem Maria Bluyssen, who died peacefully in his sleep on Thursday morning, as his heart surrendered after a life of 87 years in the service of the Church. 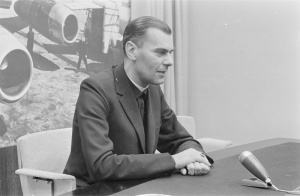 Bishop Jan Bluyssen hailed from Nijmegen and was ordained in 1950 by Bishop Willem Mutsaerts, and served as a parochial vicar in Veghel before studying spirituality in Rome. Returning to the Diocese of ‘s Hertogenbosch, he taught at the diocesan seminary in Haaren and also became spiritual director there. On 28 October 1961, Blessed Pope John XXIII appointed him as auxiliary bishop of the diocese, serving with Bishop Willem Bekkers, the ordinary. Bishop Bluyssen was made the first and to date only titular bishop of the see of Aëtus in modern Greece. After the unexpected death of Bishop Bekkers, Bishop Bluyssen was appointed to succeed him in October of 1966. The photo above shows the bishop shortly after his appointment, returning from a post-conciliar meeting in Rome. Bishop Bluyssen served until he offered his resignation for health reasons in 1983. This was granted on 1 March 1984.

Bishop Jan Bluyssen was the last surviving Dutch Council Father. Towards the end of the Second Vatican Council, he attended several sessions and was involved in several post-conciliar meetings on the liturgy. Bishop Bluyssen was the last bishop to be consecrated in the pre-conciliar rites. It is then perhaps paradoxical that he is considered a member of the more progressive wing of the Dutch bishops in the 1960s and 70s, who did most to change the liturgy and the Church in the Netherlands as a whole.

As a bishop, Bluyssen was continuously affected by health problems surround his heart, which ultimately led to his early retirement in 1984. Following his retirement, Bishop Bluyssen devoted himself to writing, of which his memoirs, Gebroken Wit (Broke White), published in 1995, are most notable.

The years of Bishop Bluyssen’s episcopate were  turbulent ones in the entire Dutch Church. The Second Vatican Council had started an unintended chain reaction in which everything was questioned, from the way parishes should function to how the liturgy should be celebrated, even to what the Church and faithful should teach and believe. Bishop Bluyssen was often allied with the more progressive movements, questioning much with them and trying to put the new thoughts into practice. In the seventeen years that he was ordinary, Bishop Bluyssen closed the seminary in Haaren and saw the number of active priests, as well as new seminarians, drop dramatically. Bishop Bluyssen made sure that things remained quiet in his diocese in the time surrounding the special Synod on the Dutch Church that Pope John Paul II convened in 1980. Partly in response to these developments was the appointment of his successor, Bishop Jan ter Schure, who was generally far more conservative and in line with Rome.

Bishop Bluyssen was deeply conscious of his own limitations and failings. This sense of reality, his esteem for people as carriers of the faith and his own modesty made him hugely popular, both during and after his time as ordinary of ‘s Hertogenbosch. The more formal and serious side of being a bishop, which Bishop Bluyssen described as “being bound to the Gospel, bound through loyalty to Christ, whose task I am called to perform … which comes to me via and through the Church”, was coupled with his being a positive and winsome conversationalist.

With the death of Bishop Jans Bluyssen the Dutch Church has lost a good man, a true man, with good and bad sides, a man of faith and a man of the people. Despite his failing health, he remained a integral part of his erstwhile diocese, for far longer than the 17 years he served as its bishop.

On Tuesday, the bishop will lie in state in the bishop’s house, where faithful may visit on Tuesday evening, and Wednesday afternoon and evening. A Vespers for the repose of Bishop Bluyssen will be offered on Wednesday evening at 7 at the cathedral basilica of St. John. His funeral will take place on Thursday from the same church, starting at 11. 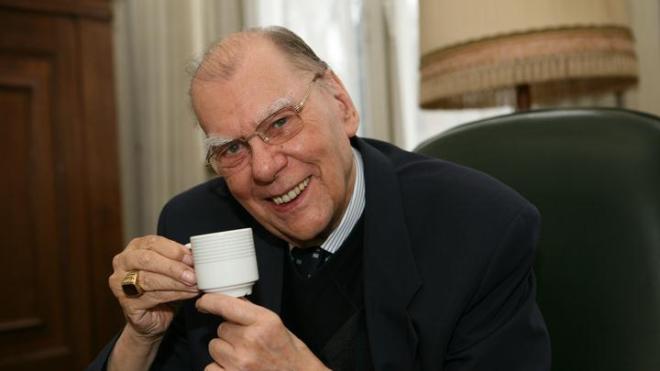