The language groups have published their second summaries of their discussions about the second part of the Instrumentum laboris. The German group gets decidedly more theological in theirs, as they discuss the false opposition between mercy and truth, grace and justice, graduality, and the practical consequences of understanding sacramental marriage in a historical and biographical way.

In today’s press conference, Cardinal Vincent Nichols recommended the German contribution as the most theologically sound.

This is my translation of the German original that was, once again, composed by Archbishop Heiner Koch: 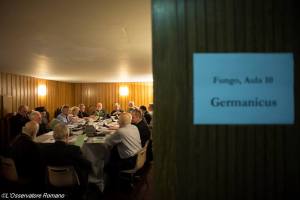 “We have extensively discussed the concepts of mercy and truth, grace and justice, which are constantly treated as being in opposition to one another, and their theological relationships. In God they are certainly not in opposition: as God is love, justice and mercy come together in Him. The mercy of God is the fundamental truth of revelation, which is not opposed to other truths of revelation. It rather reveals to us the deepest reason, as it tells us why God empties Himself in His Son and why Jesus Christ remains present in His Church through His word and His sacraments. The mercy of God reveals to us in this way the reason and the entire purpose of the work of salvation. The justice of God is His mercy, with which He justifies us.

We have also discussed what the consequences of this are for our accompaniment of married couples and families. It excludes a one-sided deductive hermeneutic which subsumes concrete situations under a general principle. For Thomas Aquinas as well as the Council of Trent, the implimentation of basic principles of prudence and wisdom to the particular and often complicated situations, is pending. This is not about exceptions to which the word of God does not apply, but about the question of a fair and reasonable application of the words of Jesus – such as the words about ithe indissolubility of marriage – in prudence and wisdom. Thomas Aquinas explained the necessity of a concrete application, for example when he says, “To prudence belongs not only the consideration of reason, but also the application to action, which is the goal of practical reason (STh II-II-47, 3: “ad prudentiam pertinet non solum consideratio rationis, sed etiam applicatio ad opus, quae est finis practicae rationis“).

Another aspect of our discussion was in the first place the gradual introduction of people to the sacrament of marriage, beginning with non-binding relationships, via couples cohabitating or only civilly married couples to valid and sacramental marriage, as frequently mentioned in Chapter 3 of the second part, Accompanying these people pastorally in the various steps is a great pastoral task, but also a joy.

It also became clear to us that we are too static and not biographical-historical in many debates and observations. The Church’s  doctrine of marriage was developed and deepened in history. First it was about the humanisation of marriage, which condensed into the conviction of monogamy. In light of the Christian faith the personal dignity of the spouses was recognised more deeply and the divine likeness was perceived more deeply in the relationship of husband and wife. In a further step the ecclesiality of marriage was deepened and it was understood as a house church. Subsequently, the Church became more aware of the sacramentality of marriage. This historical path of deeper understanding is today also visible in the biography of many people. They are first touched by the human dimension of marriage, in the environment of the Church they become convinced of the Christian view on marriage and from there they find their way to the celebration of sacramental marriage. As the historical development of the Church’s teaching has taken time, so her pastoral care must also accord the people on their path to sacramental marriage a time of maturing and not act according to the principle of “all or nothing”. Here the thought of  a “growth process” (Familiaris Consortio, 9) can be developed further, as John Paul II already established in Familiaris Consortio: “The Church’s pastoral concern will not be limited only to the Christian families closest at hand; it will extend its horizons in harmony with the Heart of Christ, and will show itself to be even more lively for families in general and for those families in particular which are in difficult or irregular situations” (FC 65). Here the Church inevitably stands in the conflict between a necessary clarity in teaching about marriage and family on the one hand, and the specific pastoral task to accompany and convince those people whose lives only comform in part with the principles of the Church on the other. It is important to take steps with them on the road to the fullness of life in marriage and family, as the Gospel of the family promises.

Personally oriented pastoral care, which equally includes the normativity of doctrine and the personality of the person, keeps his ability to be conscientious in mind and strengthens his responsibility, is necessary in this regard. “For man has in his heart a law written by God; to obey it is the very dignity of man; according to it he will be judged. Conscience is the most secret core and sanctuary of a man. There he is alone with God, Whose voice echoes in his depths” (Gaudium et Spes, 16).

We ask to consider to more aspects for the final text:

Every impression should be avoided that Scripture is used only as a source of quotations for dogmatic, legal or ethical convictions. The law of the New Covenant is the work of the Holy Spirit in the hearts of the faithful (cf. Catechism of the Catholic Church, N. 1965-1966). The written word must be integrated into the living Word that resides in the hearts of people through the Holy Spirit. This gives Scripture a broad spiritual power.