They continue to be the subject of much criticism. Some claim their views have been victorious at the Synod, others say they have not. Some say they are manipulating the media, relishing in their rebelliousness… Well, that’s all fine to write lengthy articles, opinion pieces and blogs about, but I continue detesting conspiracy theories, and rather take people at face value and at their word (which does not mean I agree with them on all matters). On that note, here is my translation of the message of the German bishops who participated in the Synod of Bishops, Cardinal Reinhard Marx, Archbishop Heiner Koch and Bishop Franz-Josef Bode, at the conclusion of said meeting: 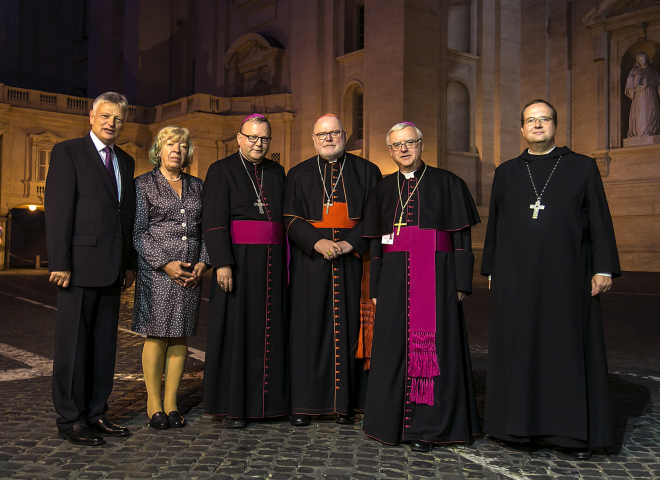 “We conclude the Synod of Bishops in Rome with gratitude. For three weeks we have debated and struggled intensively and encouragingly, controversially and honestly with representatives from all over the world, dug into theological questions and addressed the realities of life of the family. Above all, these weeks were a spiritual wealth: in the celebration of the Eucharist, in common prayer and fraternal conversation we have sought ways in which the mission of the family in Church and world can succeed.

At the basis of our deliberations, next to Holy Scripture and Tradition, were the words of the Second Vatican Council: “The joys and the hopes, the griefs and the anxieties of the men of this age, especially those who are poor or in any way afflicted, these are the joys and hopes, the griefs and anxieties of the followers of Christ” (Gaudium et spes, 1). In this spirit we grappled theologically and practically with the needs of the family.

The Synod of Bishops took seriously the situation of families as they are: open, honestly, differentiated globally, but similar in many ways. Across all cultural divides, marriage and family are a constant value of human coexistence. We are therefore grateful to Pope Francis that he followed the synodal way on this topic. It began with the worldwide questionnaire of the Vatican and the Synod of last year. The current conclusion is not the end, but a colon. We must continue on this road for and with the family. No other global institution undertakes such a global contemplation with worldwide participation on the topic of the family.

The Synod has shown the great importance that the Church attaches to marriage and family. There was already a great consensus on this question during the deliberations. The Church encourages people to live marriage and family and the make an effort to continue faithfully on this way and endure difficulties. The Synod emphasised that the normal everyday life of the family is a witness. At the same time we are called to find ways to strengthen and accompany the family. This can happen, for example, by advocating in favour of the family in social policies, especially also for large families or single parents, using state legislation to promote the family and recognising its value for society. This must also and especially happen within the Church, for example through the corresponding training of pastoral workers to accompany families, through better marriage preparation and guidance, especially in the first years of marriage, but also through counselling services and facilities.

It became clear during the Synod that Church guidance is required, especially during times of hardship, for example when raising children is difficult, when family members are ill or disabled, requiring much care and attention, when spouses are fighting, when people are separated and remarry. Here it is important to recognise not only what the Church does, but also to say honestly where we have failed as Church: misconceived efforts to uphold Church teachings have repeatedly led to harsh and merciless attitudes, which caused people pain, especially single mothers and children born outside of marriage, people living together before or in place of marriage, people with homosexual orientation and divorced and remarried people. As bishops we ask these people for forgiveness, as we formulated in our working group.

We are grateful that the Synod has expressed  an appreciation for interfaith marriages and underlined the character of the path of life in marriage and family, while a more positive view of the path before marriage was also discussed. On the topic of divorced and remarried people the necessary distinctions of situations were addressed in the text. It was attempted to avoid generalisations. The Synod is clear that every situation in life must be considered individually. In hindsight we would have wished for more courage to deal with the realities more intensively and recognise them as signs of the times in which God wants to tell us something, but we also recognise that we have learned to go along with other cultures and experiences.

The Synod of Bishops advises the Pope. We will accompany the way forward with our prayers. Pope Francis now has the task to use the wealth of results for the Church. The Holy Father can only take decisions for the entire Church, where he always stand for the unity of the Church and the further synodal path, as he said himself in his historic speech last week.

What was considered in the Synod, we will develop and make concrete at home. As Church we accompany and live with the people, the spouses, the families, especially also with the oppressed, with their joys and hopes, sorrows and fears. Questions which occupy us now are these: How do we open, and not close, the way towards Christ? How do we fully integrate people in the Church? How do we become a Church with open doors? And how do we relate to families in the most difficult situations, such as refugee families, to make a life in dignity possible for them, as the Gospel shows? How can we encourage a new spring in the pastoral care of families in general?

The final text of the Synod of Bishops opens perspectives for action and gives impulses for further theological thought. That will also be incorporated in the message of the German bishops about marriage and family, which we are currently working on. What is important is this: the synodal path of the Church continues. Perhaps it has only just begun. The Church stays on the path and with the people, also in the questions of marriage and family. We, as Church in Germany, want to continue on this road with Pope Francis. Encouraged and strengthened we return to our dioceses.”